Prominent Marxist theoretician and prolific writer. Was in Berlin between 1922 and 1928. Elected Chairman of the Indian Association in Central Europe formed by Virendranath Chattopadhyay in 1927. Attended the first all India conference of the Workers’ and Peasants’ Parties in Calcutta and the underground meetings of the CPI CEC in December 1928. Sentenced in the Meerut Conspiracy Case. Played  a leading role in the reorganization of the CPI in 1933-34 and became its General Secretary. Internment in Bijjapur during 1934-37. Edited the Documents of the History of the Communist Party of India. Died in 1981. 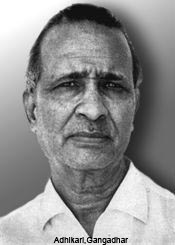