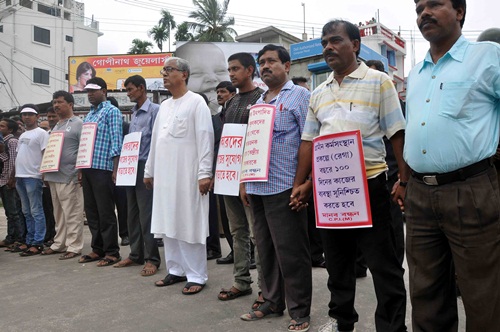 The Left movement in Tripura reached a new mile stone on 19th August as more than 2.25 lakh people formed human chains at 96 spots across the state stretching to around 300 kilometres in all. The impressive show of strength marked the culmination of the August movement at the call of CPI(M) Tripura state committee and it was unprecedented in the annals of mass mobilisation in the state.

The human chains across the state saw huge participation of masses from all sections of people. In most of the spots outside Agartala the scheduled time for forming the chain, i.e. 11.30 AM to 12 PM, saw a heavy downpour. But the foul weather could not dampen the spirit of the masses.

This programme was the culmination of the August movement on 6 demands:

i) No downsizing of central budget allocation for agriculture and rural development. Centre must procure agricultural products directly from the farmers at profitable prices.

iv) Centre must generate job opportunities for the unemployed. The lakhs of vacant posts lying in central government departments must be filled up.

v) Enforce  Food Security Act. Every family, irrespective of BPL/APL, must be supplied 35 kg rice per month at the rate of Rs.2 per kg.

vi) The Special Category Status of the North East states must be retained. Theymust not be deprived of this at any cost.

In addition to it the campaign also focused on the demands of the countrywide strike on 2nd September called by the central trade unions.

The campaign kicked off with 24 sub-division level conventions. This was followed by 5179 meetings in Panchayats, ADC villages and wards of the urban areas. Para-wise (Hamlet) meetings were held in both rural and urban areas. Thereafter, a total of 1162 Panchayat/Village and Ward wise Jathas were organised throughout the state. The Jathas covered one or more Panchayat/Village areas.

All these were supplemented by posters displayed across the state and write ups explaining each of the demands published in Daily Desher Katha.

CPI(M) state secretary Bijan Dhar congratulated the people for their participation in the human chains.

"The enthusiastic participation of the masses, despite rains in most parts of the state, is proof enough that the masses have embraced the 6 point demands and have taken to streets on their own demands. The Central government should pay heed to the legitimate demands otherwise more vigorous movements will follow," he said.