Protests were held across Karnataka against the attack on a young Dalit writer and journalism student Uchangi Prasad at Davangere in central Karnataka on October 22. Protests were held at Bangalore, Mangalore, Davangere, Tumakuru, Gajendragada and other places since the incident. Prominet writers, speakers were present at the protest meetings.  Speaking at the Bangalore protest meeting Prof. K M Marulasiddappa said that 'Drona's trying to cut fingers of 'Ekalavya's in "modern times' too. 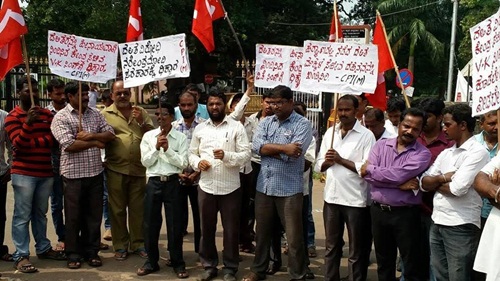 Uchangi Prasad was taken by deceit (he was told that his mother has been admitted to Hospital) from Hostel, by a youth belonging to a rightwing outfit. Later he was taken to a deserted place and beaten badly by 8-10 youth. They also tried to cut his fingers.

His 'Crime'?! He published a collection of poems 'odala kichchu' (Fire in the Stomach) that expresses his outrage against untouchability. This collection was released by Senior Writer K S Bhagavan. Prasad is the son of Dalit agricultural worker parents, and had to work as bonded labour in childhood. Though no organisation has claimed responsibility for the attack, youths who attacked Prasad warned him against writing bad about 'Hinduism'.  They applied vermilion on his face, abused  him in casteist language, and told him that he was born Dalit because he committed sins in past lives.