In an attempt to get more seats in West Bengal, the BJP led by Prime Minister Modi and his right-hand man Amit Shah, have been vigorously fanning the flames of religious division and animosity during their campaigning in the state. This has taken the form of openly talking about throwing out so called illegal immigrants into the Bay of Bengal, of imposing the National Register of Citizens in the state and repeatedly, in meeting after meeting, alleging that the Hindu community is under siege in Bengal. The duo – and their satraps – have been trying to synthesize a Hindutva based unity by portraying that the religion is under attack, that customs and rituals are not allowed to be observed and that the “other people” or “they” can freely observe their religious customs.

Addressing a rally in Srirampur, Modi recounted this litany of grievances and added that for the bhakts of Ram, Durga and Saraswati, not only was it difficult to observe their religious festivals, their daughters and sisters could not go out of the house out of fear.

West Bengal has 27% Muslim population, and undoubtedly, there is a sensitive cross border immigration issue from neighbour Bangladesh. But for decades, under the Left Front govt., communal strife was not a feature of the state’s social and political life, unlike many other states. Mamata Bannerjee led TMC had laid the ground for the entry of RSS into Bengal when she was a partner in the Vajpayee led NDA Government. Her brand of opportunist politics included the mixing of religion and politics just as the BJP - RSS do. Alliances in different forms with the fundamentalist forces in the minority community in the name of minority rights, while in fact not addressing real issues of minorities, provided fertile ground for the communal polarization politics of the BJP. At the same time the TMC started competing with the BJP in organizing processions and religious festivals, in a dangerous game of competitive communal politics.

The communal strategy of BJP is not an election campaign tactic. Have a look at the sudden rise in communal violence in the state after Modi’s storming to power at the Centre in 2014 (data from responses of Central Govt. to Lok Sabha questions nos. 156 and 1767). 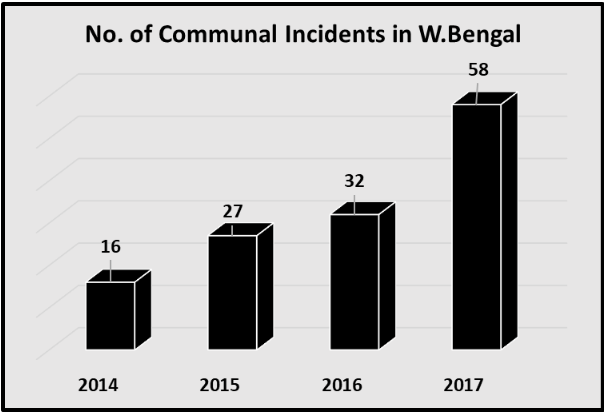 Information from govt. is available only till 2017, but the trend is shockingly clear. Number of communal incidents in the state have risen by three and a half times between 2014 and 2017.

There were a series of communal clashes in 2016-17 mostly arising from competing claims of Durga idol immersion and Muharram processions or holding of Ram Navmi processions. These were spread across the state and the BJP utilised them to precipitate violence, while the Banerjee govt. and its police continued with its strong-arm tactics. Violence flared up in West Mednipore, Burdwan, Kolkata, Howrah, Hajinagar, Ilambazar, etc. Derogatory and highly provocative statements made by leaders of the Hindu Mahasabha in Kaliachak, Maldah, led to a violent retaliation

In 2018, in March, the BJP openly organised a series of events ostensibly to mark Ram Navmi which ended in a bloodbath. In several districts of Bengal and adjacent Bihar, bike processions with riders carrying swords and tridents among saffron flags were taken out, leading to violence after provocative slogans were shouted, and the police moved in to curb the mounting tension. At least three people died in the clashes between two communities. In the Asansol-Durgapur-Raniganj belt rampaging mobs indulged in looting and an Imam of a mosque were killed.

What started with organising aggressive and armed parades on Hindu festivals turned into “aggrieved Hindu” sentiments because Mamata Banerjee reacted with her typical strong-arm methods. Hindus were portrayed as victims of discrimination – a travesty in a state with 73% Hindu population. This relentless drive of the BJP and Sangh Parivar to communalise society in Bengal is an attempt to take political advantage of growing discontent of the people against the corrupt and failed policies of TMC.

The Left has faced a sustained attack from the TMC gangs across the state after its loss in 2011 Assembly polls. But in recent years, it has seen a revival with influx of youth and a strategy of large mobilisations for agrarian and working-class issues. It is the Left with its alternative policies which has defended and advanced secular principles as the only alternative to TMC and BJP. Much of media attention is focused on the BJP-TMC war, but the rise of the Left, especially the CPI(M), is largely ignored. In the process, the Left’s brave confrontation of the communal drive is also ignored.

In fact, it is only the Left that has been consistently fighting to save the soul of Bengal by exposing the imposition of violent Hindutva or attempts to peddle soft Hindutva, as recently undertaken by Banerjee by organising Hindu religious processions to prove her own credentials.