Land Ordinance: The Obvious Answer is the Hidden Motive

Arun Jaitley has taken it upon himself to come with a defence of the draconian Land Acquisition Ordinance. He is clearly seeking to defend the indefensible. What he claims are the obvious answers actually seek to camouflage the hidden intent and obvious motives with which the Modi-led BJP Government brought the Ordinance, not once but thrice in succession. The first obvious answer Jaitley has to give is to the question as to why he as the leader of the House in Rajya Sabha and Sushma Swaraj as the leader of the opposition in the last Lok Sabha supported ‘The Right to Fair Compensation and Transparency in Land Acquisition, Rehabilitation and Resettlement  Act 2013’. Has he forgotten that the Parliamentary Standing Committees that looked into the Bill was headed by senior BJP leaders Kalyan Singh and Sumitra Mahajan? The Left with its limited strength had moved many Amendments and also voted against the Bill. Why did the BJP choose not to take recourse to such Parliamentary processes? The second obvious answer he has to give is as to why a Joint Committee of the Parliament (not the regular Parliamentary Standing Committee on Rural Development) with a brute majority for the BJP and its allies after meeting different stake-holders is unable to accept the BJP Government’s own provisions in the Land Acquisition Ordinance. Why promulgate the Ordinance when the matter as he rightly pointed was pending under the Joint Committee of Parliament? The third obvious answer he needs to give is regarding his Party President Amit Shah’s claim that by not re-promulgating the Ordinance Prime Minister Modi proved that the Government was “farmer-friendly” and that every farmer in this country had welcomed the move. Who is speaking the truth Modi, Jaitley or Shah? If allowing the Ordinance to lapse was a ‘farmer-friendly’ move how could imposing the Ordinance be ‘farmer-friendly’ too? 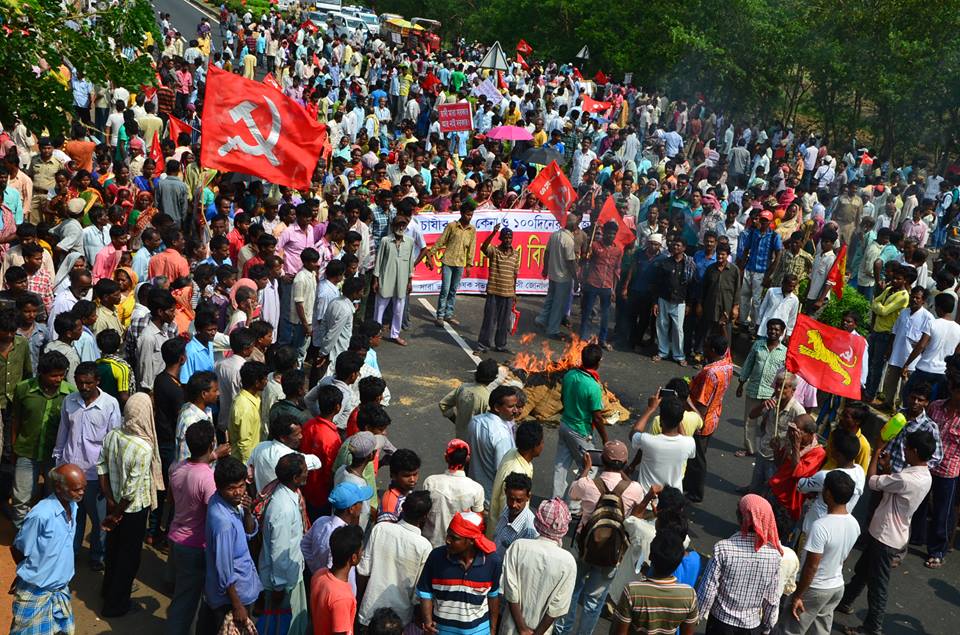 Jaitley’s contention that the 2013 Act is badly drafted having lots of ambiguities and errors with certain provisions being contrary to the language used therein is a pointer to his and his Party’s incompetence too. How could they overlook such issues when a legislation that would have an impact on millions of livelihoods was being debated? It is clearly an afterthought. Even if one assumes all that he has said is true then why dump an entire Act that emerged out of prolonged deliberations without seeking to rectify them? He is merely referring to semantics and grammar rather than any substantial issues, least of all any ‘farmer-friendly’ matter. The BJP claims that they granted flexibility to States so that they could bring Amendments to the Act. However, this is well within the Constitutional right of the State and not out of their magnanimity. The requirement for a notification within a period of one year to make compensation and the relief and rehabilitation provisions applicable to the notified 13 laws had to be complied with and has not sprouted out of the present Government’s imagination. It was an important demand of all Farmers’ Organisations and People’s Movements and it was incumbent on any Government to notify the same.

But are there no problems with the 2013 Act? The problems have been pointed out and remedial measures have been proposed but both the BJP and the Congress chose to ignore them. Both the Parties in their respective versions failed to assure livelihood guarantees and a just share of the enhanced value accrued by change in land use to the dependents on land. The Congress as well as the BJP believes in the same Neo-Liberal model of development. They are only competing to woo the corporate sector while at the same time indulging in shadow-boxing. The Congress claims that tens of thousands benefited from their Act also is far-fetched. Such claims need to be substantiated and meet the test of public scrutiny.

The Left and the All India Kisan Sabha as well as a broad coalition of organisations representing dependents called the Bhoomi Adhikar Andolan had concrete suggestions to strengthen the 2013 Act. These called for defining ‘Public Purpose’ properly to ensure only those activities that would benefit the larger society would come under it and not activities for corporate profiteering. It called for strengthening the provisions of prior-informed consent and Social Impact Assessment. Food Security provisions would be strengthened by protecting all productive land fit for cultivation and not merely multi-cropped land in irrigated areas. It also sought a scientific land use plan at the time the 2013 legislation was under discussion and even during the recent stand-off. This is unlike the inconsistencies exhibited by the BJP which in its Election Manifesto had promised a scientific land use plan for protecting food security and conveniently forgotten it once in power. Protection of common property resources was also demanded by these groups. In addition further enhanced compensation, time-bound rehabilitation and resettlement, land for land wherever possible, return of unutilised land with a punitive cess for meeting costs of amelioration of damages and replenishment of soil was sought. Clear provisions to ensure that all the dependents on land would be compensated; assured livelihood guarantee and a just share of the enhanced value accrued by change in land use to the dependents on land were suggested.

Rather than addressing such issues wherein the 2013 Act was found wanting, the BJP Government hit at the limited safeguards provided by the 2013 Act like the principle of Consent, SIA, safeguards for food security and the like. The BJP Government sought to reinstate the Eminent Domain or the power of the State to forcibly acquire Land without the owner's consent and in effect brings back the draconian provision in the Colonial Land Acquisition Act of 1894. To put it in simple terms while even a small object cannot be taken without the owner’s permission the Government was saying the farmers’ main source of livelihood could be taken without their consent. It withdrew even the minimal guarantees provided by the Land Acquisition Act of 2013 and removed distinction between acquisition for the State and for Private companies. Private companies and their activities of unbridled profiteering were put at par with public purpose. The Amendments provided for the expansion of Industrial Corridors to include land up to 1 km on either side of the designated road or railway line for such Industrial Corridor. On the pretext of survey of Government land and wastelands small landholders who are cultivating such lands are being evicted. The BJP and Congress ruled State Governments are competing with each other to portray themselves as investment friendly and millions are facing the threat of eviction. The hidden motive is the obvious answer to the question as to why the BJP Government promulgated the Ordinance thrice. It was pay-back time for the BJP. The corporate lobby and real-estate speculators clearly were demanding their pound of flesh. Clearly, it is the broad issue-based unity built and united struggles that forced the Government to backtrack fearing electoral repercussions of such a movement.

The demand of Farmers’ Organisations and People’s Movements to come up with a white-paper on the extent of land acquired, the land remaining unutilised, transparency on extent of acquisitions and the jobs such acquisition has generated has been met with Government indifference. The CAG Reports have shown how vast tracts of land have been acquired in the name of SEZs, remain unutilised or have been diverted for other purposes and studies show that the employment generated in mega projects are far below what was promised. According to calculations the extent of land that would be under the potential threat of acquisition in the case of the Delhi Mumbai Industrial Corridor, Bangalore Mumbai Corridor and Smart Cities in their vicinity will be over 7,00,000 sq.km. This humongous area would be more than twice the size of the United Kingdom. The Government needs to come clear on such fears. Finally Jaitley has to give an obvious answer whether he intends to grow food in thin air.