By end of April, estimates suggest that 14 crore existing jobs had been lost in India, adding to the already existing 10-11 crore strong army of jobless. It was a mind-boggling disaster, the like of which this country had never seen before.

Joblessness is death by a million cuts, although it is often treated only as an uncomfortable statistic by neoliberal economists and bureaucrats. The staggering scale of unemployment in India before, during and after the lockdown means that crores of people, and their families, are barely able to survive, surrounded by uncertainty and despair and forced to either depend on charity or on inhumanly low wages that they may get for some sporadic work.

Whatever meagre savings of cash or valuables or grain they had, are long gone, and many are even deeper in debt. Young people who make up the bulk of India’s working age population are facing a dark future as they see jobs vanishing before their eyes.

Why has this happened? What could the government have done to prevent this humanitarian disaster? These questions need to be asked and answered.

Economic Slowdown Before the Pandemic

The Indian economy had started slowing down in 2019 causing unemployment to steadily rise. As can be seen in the chart above, the jobless rate had hovered between 7-8% in the preceding months, according to data collected by CMIE. 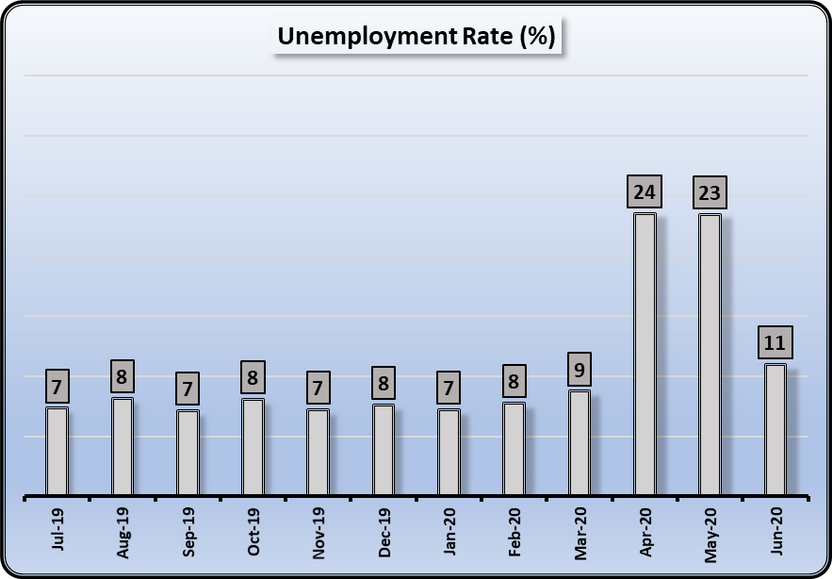 This scale of unemployment, at a time when the Indian economy was growing at a fair speed, shows that there was something inherently wrong with the policies as well as the whole system. What was going wrong was this: inequality was increasing as high growth only meant that the rich got richer and the poor got poorer. According to an Oxfam report in 2019, the top 10% of the Indian population owned 77% of the total national wealth. It was estimated that 73% of the wealth generated in 2017 went to the richest 1%, while 670 million Indians who comprise the poorest half of the population saw only a 1% increase in their wealth.

This dire situation of increasing joblessness and poverty on the one side and extreme concentration of wealth on the other was propped up by none other than the Modi government. It had allowed foreign capital to enter the country, sold off public sector units to private entities, allowed privatisation of natural resources, loosened up labour laws and given various concessions to corporate sections, even while ruining the MSME sector by imposition of GST.

This situation led to depleting purchasing power in the hands of the people. With no jobs or low paying jobs, and low prices for farm produce, people just didn’t have the money to buy things. This reduced the demand and that in turn affected industrial production and services sector too. The economy thus went into a downward spiral.

Then came the twin shocks of COVID-19 and the lockdown suddenly announced by PM Modi on 24 March. This brought economic activity to a juddering halt for two months. The biggest fallout of this disaster was the unprecedented loss of jobs across all sectors of the economy.

After the loss of nearly 80 lakh jobs in March, most of them in the last week after the countrywide lockdown was announced, data collected by CMIE shows that a staggering loss of 12.8 crore jobs took place in April. Almost a third of jobs compared to last year were lost in a month. 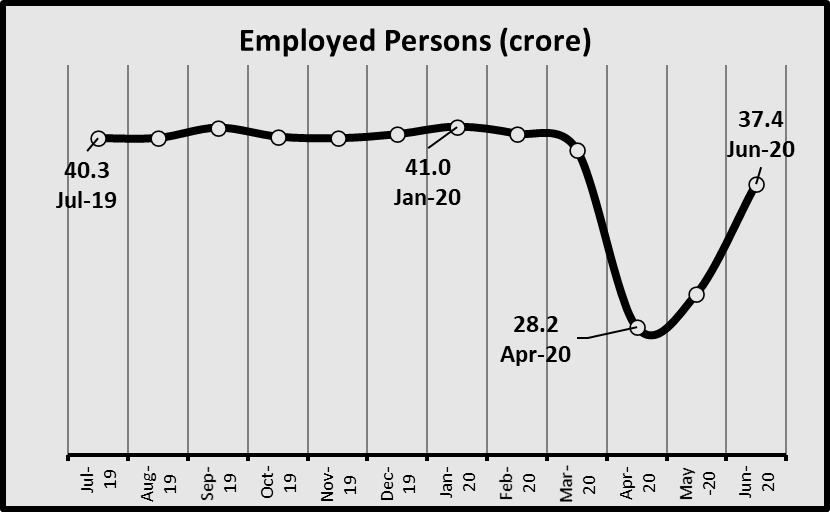 These figures show that there was unprecedented economic distress in the country, mostly being shouldered by common people. While much hue and cry was raised by powerful industrial lobbies to demand stimulus and assistance packages for the revival of industrial activity, the plight of working people, left without earnings for over two months, was largely ignored by the govternment.

Not only did industries, offices, shops etc. shut down for a month but the vast informal sector (in both industry and services) collapsed because of it. The bulk of India’s 440 million strong workforce is employed in this sector which spans agriculture, industry and services.

It should be noted that – on paper – the Modi govt. had announced that no worker will be thrown out of his/her job and wages will have to be paid by employers for the lockdown period. The Prime Minister himself repeated this ‘plea’. Despite all this posturing, this did not happen and there was en masse termination of employment. Not surprisingly, the govt. withdrew this advice after employers went to court.

One of the most visible and dramatic effects of this storm of job losses was seen when lakhs of migrant workers started travelling back to their homes in distant villages. This heart-rending wave of reverse migration was a direct result of the imposition of the sudden and misconceived lockdown. At least 971 people died from exhaustion, hunger, accidents etc. in this process.

Recent studies have brought out another distressing feature of job losses suffered during the lockdown. Workers from socially disadvantaged sections like women, Dalits and Adivasis suffered more job losses. This is even more ironical because it is women who make up the bulk of frontline workers in the fight against COVID-19, like ASHAs and nurses, and it is Dalits who almost exclusively perform all sanitation and cleaning duties.

After Easing of Lockdown

Some people had hoped that once the lockdown is lifted in phases, the economy would bounce back and so would employment.  Indeed, some jobs have come back but if you look at the details a very worrying picture emerges. As shown in the first chart above, the unemployment rate in June was 11% and its likely to be around 9-10% in July. These levels are higher than the pre-pandemic levels. That means more people are going to remain unemployed than earlier. Remember that the falling work participation rate also shows that there are many who have simply given up the hope of joining the workforce and are thus being counted as “out of the workforce” and not as unemployed.

Jobs in agriculture have come back driven by early rains and consequent early and extensive kharif sowing. In fact, employment in agriculture is estimated to be at record levels because, as always, a vast number of jobless people are working in the fields at very poor wages, or just helping their family in the work. Technically they are counted as “employed” but it is just disguised unemployment. Many have found work in MGNREGA, which was restarted only after 20 April. In May 2020, about 3.3 crore households got some work in the scheme while in June the number went up to 3.9 crore. But these huge numbers only reflect the shocking level of joblessness that exists, forcing people to do a few days of manual work just to survive.

Another section of people which has started “working” is the vast number of self-employed people like petty shopkeepers, vendors and hawkers, rickshaw pullers, providers of personal services (maids, cooks, washer men/women, etc.), and other such sellers of labour. For them, it’s a matter of survival – they just can’t afford to not work, even if earnings are much lower than before. Business persons also are back in work, in most places.

Despite the difficult times, there is a simmering discontent that is gathering strength throughout the country. It became first visible on the Protest Day against job and wage losses and other issues, called by CITU and supported by several farmers, women’s, students and youth organisations on 21 April. Subsequently a series of protest actions have been held including the coal workers strike on 2-4 July which coincided with a wave of protests for more jobs, better wages, income and food support for poor families etc.

But as time passes, as food runs out in kitchens and debt mounts, as daily earners are pushed to the brink, the gathering storm of anger will definitely break open. Unfortunately, most of the Opposition forces in the country – apart from the Left - are too demoralized and clueless on how to defend the people in this dark hour. It is only the Left forces that have taken the initiative, both in providing relief to suffering people, and in raising the voice of resistance. Even in terms of administrative response, the Left has been in the forefront, with its LDF govt. in Kerala being applauded the world over for dealing with the pandemic while caring for the people. So, the Left will yet again lead the fight to defend the people – both from the virus, and from Modi govt.’s devastating policies.