The Polit Bureau of the Communist Party of India (Marxist) strongly condemns the attack on Surjya Kanta Mishra, Member of its Polit Bureau and Secretary of the West Bengal State Committee of the Party and other leaders of the Left Front.  Mishra, who is also leader of the opposition in the West Bengal assembly along with other district leaders of the Left Front, was going to visit the camps housing the flood affected in Udanarayanpur in Howrah district. 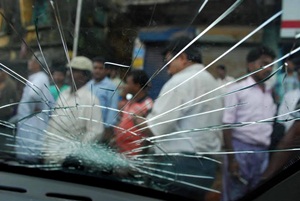 Their convoy was stooped enroute and attacked by hoodlums of the Trinamul Congress. While the occupants of the cars escaped unhurt, some of the vehicles were damaged and their windshields broken. While Misra managed to go ahead with his programme the others could not.

Such attacks aimed at curbing the activities of the opposition, are an assault on the democratic rights, which will not be tolerated by the people of West Bengal. The CPI(M) will continue the fight against such attacks and for the restoration of democratic rights in the state.