CPI(M) Polit Bureau members Brinda Karat and Subhashini Ali along with the affected dalit families from the Shabbirpur village in Saharanpur, Uttar Pradesh met the President of India today and handed over a memorandum.  The President gave the delegation a very sympathetic hearing and expressed his anguish.  He said that he would do whatever was in his power to ensure justice to the dalits of Shabbirpur.  We are herewith releasing the text of the memorandum for publication. 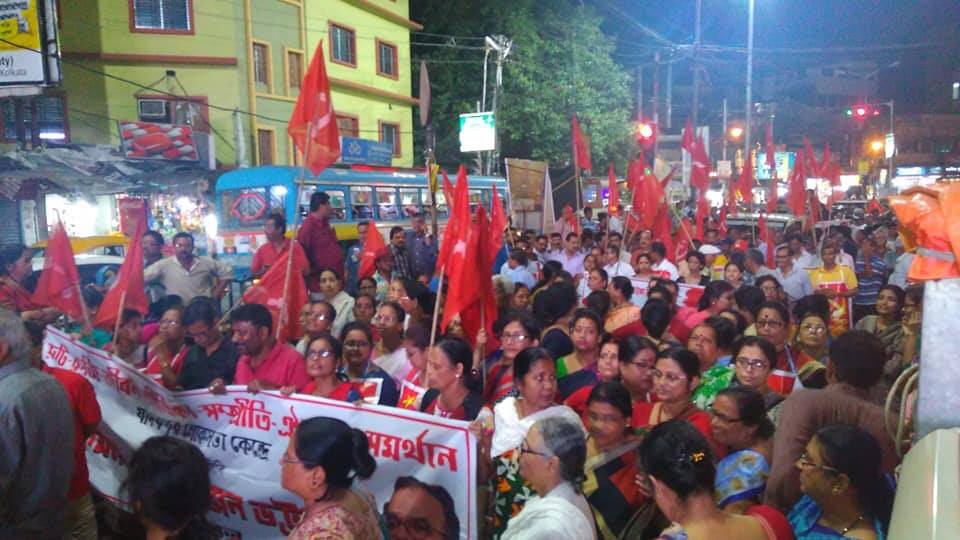 Thank you for agreeing to meet us along with Dalit victims of violence from Shabbirpur village, Saharanpur, UP.

On the 14th of April, 2017, the dalits of this village had wished to install a statue of Dr. Ambedkar in the Ravidas temple in the village.  Some upper caste people objected to this and contacted a BJP MLA who complained to the police.  The police came and stopped the work of installation. There was no opposition to this from the dalit side.

On May 5th, the upper castes belonging to the Thakur community of the area were to celebrate Rana Pratap Jayanti with the installation of a statue in the neighbouring village of Simlana.  They decided to take out a procession with loud music and DJ through the dalit area.  They were armed with swords country-made weapons and were shouting very objectionable slogans.  This was obviously an attempt to re-assert their caste superiority.  The pradhan complained to the police and requested them to intervene.  Some policemen did come but they did not do anything when the Thakurs went on the rampage in the dalit area.  They burnt 58 homes along with various agricultural implements, 25-26 motorcycles, small vans, groceries and various possessions including childrens’ books and ration cards.  4 shops were also burnt.  2 fire engines were prevented from entering the village as also a PAC truck.  14 people including 5 women and 1 boy of 14 have received injuries some very grievous.  They are all in the District Hospital.

Tragically a young man from the Thakur community, who lived twenty kms away from the site, died during this incident.  His post-mortem report has stated that he died due to asphyxiation.  His family has been given 15 lakhs as compensation.

Shockingly, the dalits have received no compensation or even an assurance of getting any from the district administration.  The attack on them by the more powerful social group in the area has also not been addressed properly. Many false cases have been foisted on the dalits.

We would like to bring to your kind attention certain facts that have led to this situation of tension and conflict in Saharanpur.  The formation of the BJP Government in UP has encouraged vigilante groups of its supporters, including the rapidly expanding Hindu Yuva Vahini which is Shri Yogi Adityanath’s own organization, to attack different sections of people in the State with impunity.  BJP leaders, including elected representatives, have also participated in these attacks.  One such attack was witnessed in Saharanpur on the 20th April when a mob led by the BJP MP attacked the residence of the SSP himself and this officer was subsequently transferred.

If this situation of  aggression under the patronage of the ruling party with complete impunity continues, many parts of UP are in danger of descending into spirals of caste and communal violence.

We would request you to intervene in this matter.  Since many members of the dalit community, for whose welfare and security your Government bears a special responsibility, have been injured and have suffered tremendous economic losses apart from humiliation and insult, we would request you to ensure that their grievances are redressed.  They must receive compensation and justice and false cases against them should be withdrawn.