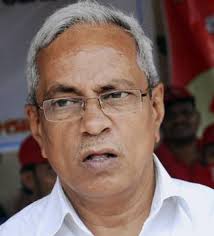 The Polit Bureau of the CPI(M) condemns the arrest of P. Madhu, Secretary of the Andhra Pradesh State Committee of the Party and Central Committee member. Comrade Madhu was arrested at the Amudalavalasa railway station, in Srikakulam district in the early morning of August 12. The police have arrested him to prevent him from visiting the area where forcible land acquisition is taking place for the Polaki Power Plant. Many other leaders and cadres of the Party in Srikakulam district were arrested while protesting the detention of Madhu.

The Chief Minister, Chandrababu Naidu is constantly resorting to anti-democratic repressive measures to suppress peaceful protests. The Polit Bureau demands the immediate release of P Madhu and all those who were arrested in Srikakulam District.