The CPI(M) held a regional conference in Coimbatore with the call to 'Defeat pro-corporate Modi government and Elect a pro-people government. 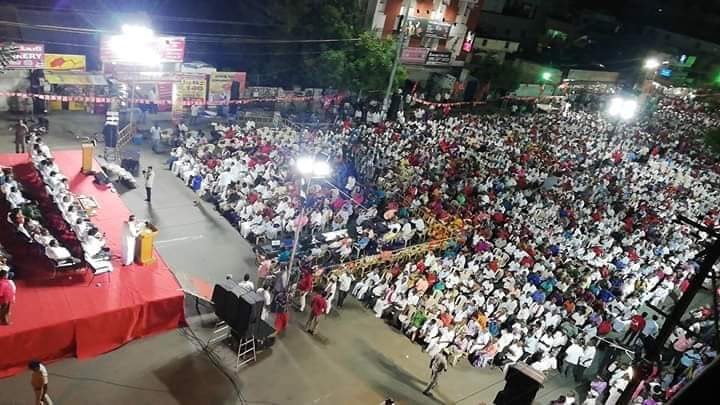 The CPI(M) held a regional conference in Coimbatore with the call to 'Defeat pro-corporate Modi government and Elect a pro-people government. The conference was attended by CPI(M) General Secretary Sitaram Yechury and Politburo member G. Ramakrishnan.

Speaking at the event, Comrade Yechury noted the job loss in the city and across thee country and attributed it to the policies of the Modi government.While farmers were committing suicide, the PM says there is no money for a loan waiver even as Rs 3,54,000 crore of corporate defaults has been written off by commercial banks. The farmers of Tamil Nadu came to Delhi and demonstrated but Modi had no time for them.

Ho noted that every institution had been destabilised. Unlike 2014, this'time, the Election Commission had not announced the elections to facilitate Modi to travel throughout the country at the cost of the exchequer and campaign.

Comrade Yechury said that the Dalits and the minorities were unsafe in the country. The constitutional protection to these sections was being diluted and to put a stop to this, it is necessary for the Modi and Edappadi governments to go, he said. He added that in Tamil Nadu, the people had the duty of defeating the BJP and the AIADMK to restore democracy in the country.