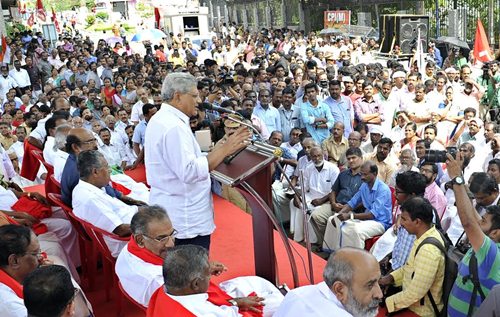 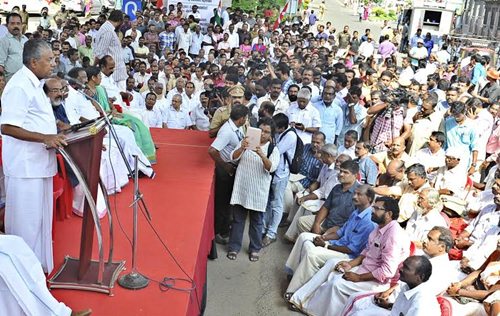 The entire state of Kerala is voicing its vehement opposition to the curbs imposed on the cooperative sector following the withdrawal of the Rs. 500 and Rs. 1000/- notes.

District and rural cooperative banks are prohibited from exchanging old notes of these values or accept deposits in these denominations even from their own customers. This has le to an unprecedented economic crisis in states like Kerala which have a strong cooperative movement.

To protest against this ill conceived move the Left Democratic Front called for a one day protest before the Reserve Bank of India office in Thiruvananthapuram on November 18. The entire Kerala cabinet led by Chief Minister Pinarayi Vijayan sat on a day long protest. Thousands of people joined in the protest.

The protest was inaugurated by CPI(M) General Secretary Sitaram Yechury. In his short address he warned the central government of widespread protests if immediate alternative measures to ease the sufferings of the people are not put in place.  He said that the Prime Minister cannot decide the way people of the country live. “Under our constitution the people are supreme. The Constitution begins with 'we the people'. The Prime Minister cannot decide the way people lead their lives. This is unacceptable...there will be widespread protests against this measure"

He added that the Kerala and Tripura governments led by the CPI(M) will take initiatives to mobilize non-BJP governments to jointly demand that the Centre compensates for the loss in revenue incurred by the states on account of the withdrawal of the Rs 1000 and Rs. 100 currency notes.