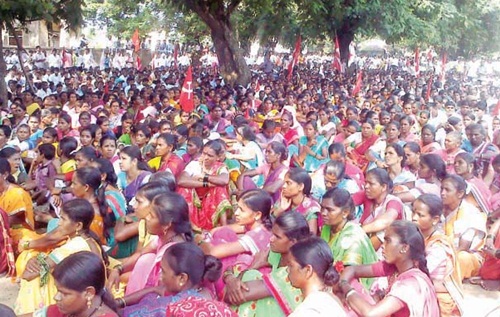 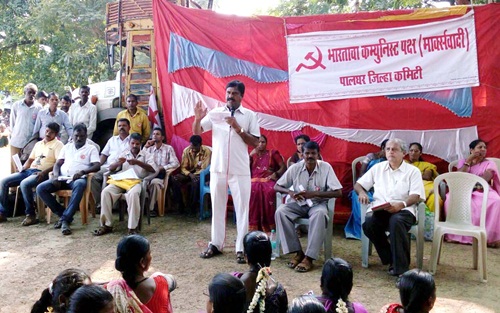 More than 20,000 people from the tehsils of Dahanu, Talasari, Vikramgad, Palghar, Jawhar, Mokhada and Wada from Palghar district and Shahapur tehsil from Thane district marched under the banner of the CPI(M) and the AARM to the District Collector’s office at Palghar on October 16, 2015 to castigate the BJP-led governments at the centre and in the state and with a 21-point charter of burning demands of various sections of the working people. An overwhelming section in the march were Adivasis and nearly half of them were women.

This march was organised in connection with Martyrs’ Day which has for long been observed every year on October 10 in Thane district to commemorate the memory of 60 martyrs of the Red Flag who laid down their lives in the district during the last 70 years since the famed Adivasi Revolt of 1945. October 10 was also the day that the legendary heroine of the Adivasi Revolt, Godavari Parulekar, was cremated in 1996.

Every year for the past several decades, thousands of Adivasis march on the roads in Thane district with red flags on Martyrs’ Day, October 10, reasserting their determination to continue the struggle for emancipation against exploitation and injustice, to build a world free of poverty and hunger – a struggle begun by their forefathers 70 years ago.

The district of Thane has been bifurcated in two districts, namely Thane and Palghar districts, on August 1, 2014. Palghar is predominantly a tribal district.

Undaunted by the scorching October sun, thousands of participants marched through the streets of Palghar demanding an immediate rollback of the unprecedented price-rise, drought relief, crop loans, implementation of the Forest Rights Act (FRA), food security and cheap grains in the PDS, water for drinking and agriculture, work and enhanced wages under MGNREGA, electricity connections, payment of wage arrears to Anganwadi workers, etc. The march also denounced the BJP-led state government’s recent move to amend the law that prevents non-Adivasis from buying up Adivasis’ lands.

All the speakers lashed out at the BJP-led central and state governments for their blatant pro-corporate policies and condemned their failure to control the sky-rocketing prices of all essential items and to take steps for drought relief. The situation in the tribal areas has worsened with the non-implementation of the FRA, non-availability of food grains and of work under MGNREGA. The drought has deepened the crisis with agricultural output being halved. Increasing poverty and migration in search of work has had a devastating effect on tribal families leading to a spurt in malnutrition and starvation. The speakers also flayed the attacks on democracy, secularism and social justice that were being launched by the RSS, VHP, BJP and Shiv Sena to divide the people on religious and casteist lines.

A delegation met the District Collector and discussed the charter of demands. He assured the delegation that he would look into and take immediate action on many of the issues that were raised. He also set up a special meeting of the CPI(M) and AARM delegation with officials of all the concerned departments on November 2.

Preparations for the rally included hundreds of village meetings in all the tehsils and the distribution of 30,000 leaflets printed by the district committee. All class and mass organisations contributed their mite to the great success of this rally. Over 1,500 copies worth over Rs 7,500, of the current issues of the CPI(M) state weekly ‘Jeewan Marg’ and of the CPI(M) state committee’s booklet on ‘One Year of the Modi Regime’ were rapidly sold out in the rally.

This rally had a great political impact in the district and proved once again that the CPI(M) was the only force in the district that genuinely stood by the working people. It was well covered both in the mainstream media as well as the social media.