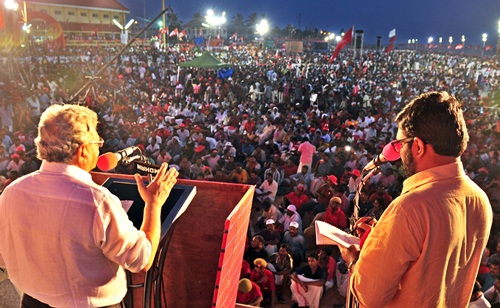 After travelling 2000 kilometers through 14 districts of the state, and meeting 35 lakh people, the Navakerala March ended with a massive public meeting at the Shanghumugham beach, in Thiruvananthapuram on 15 February. The march was led by CPI (M) politburo member Pinarayi Vijayan and spent one month conveying a new hope to the people of Kerala.  People in 117 centers greeted the leaders in public meetings in respective assembly constituencies.

Hundreds and thousands of people from Thiruvananthapuram district thronged at ONV Nagar (Shangumugham Beach) to reaffirm their faith in the left movement led by CPI (M) which is poised to fight the assembly election due in May 2016.

The concluding session of the march which was scheduled on 14th February, had to be rescheduled to the 15th due to the unfortunate demise of eminent poet ONV Kurup who was chairman of the organizing committee for the public meeting.

Inaugurating the meeting, CPI (M) general secretary Sitaram Yechuri said that, RSS is trying to make India an intolerant fascistic Hindurashtra. The arrest of students in JNU and  the attack on  CPI (M) central committee office are examples of such intolerance. Threat calls have been coming to the CPI (M) office even after midnight.

"The CPI (M) knows how protect ourselves and people from such attacks. Communists don’t need any certificate from the assassins of Gandhi," Yechury said.

The aggressive attack of the Hindutva forces is meant to divert the attention of people from their real issues, he added.  "Under Modi rule, our country is increasingly becoming a junior partner of USA. This is evident in the foreign, economic and defense policies of this government," he said.