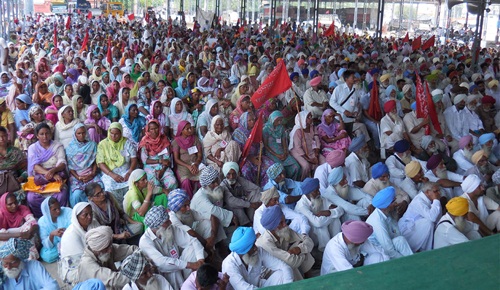 A joint massive convention was organized by Four Left Parties today at Grain Market grounds at Barnala by four Left parties – CPI, CPI(M), CPM Punjab &  CPI(ML) Liberation against the anti people policies of the  centre and state governments and for settlement of the genuine and just demands of the working people.  More than 2000 people from  Malwa region of Punjab participated in the convention.

Comrades   Charan Singh Virdi, Hardev Arshi, Mangat Ram Pasla , Sukhdarshan Natt, vijay Misra  and Jagroop Singh while addressing the convention held the neo liberal policies pursued by the central and state governments responsible for increasing price rise, unemployment, rampant corruption, indebtedness of the peasants and agricultural workers.  They condemned the Akli-BJP government led by Parkash Singh Badal for the Drug menace, deteriorating law and order situation, increasing atrocities on dalits and women. They further said that the drug trade is being run with the connivance of the politicians and the police. They alleged that the sand, cable and transport mafia is run under the patronage of the ruling dispensation with  support from the police.

The convention demanded free education  and  health facilities, 10 marla plots to rural homeless poor, houses  for the urban poor,  and round the year work to MNREGA workers.  The convention decided on an action programme  to hold Day & Night dharnas all over Punjab in front of Deputy commissioner’s  offices  from 07-09 August , 2016.