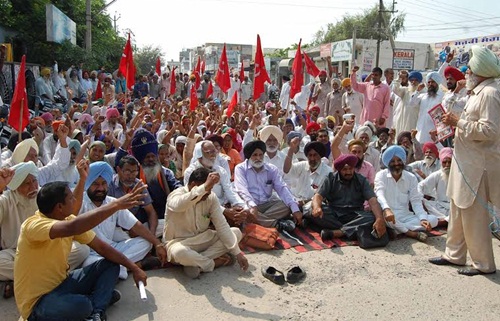 The Co-ordination Committee of four Left parties CPI, CPI(M), CPM Punjab & CPI(ML-Liberation)organized massive dharnas and rallies  in support of the demands of the peasants and agricultural workers at district headquarters all over Punjab on 12 October 2015. The peasantry in Punjab has been struggling for the last few days demanding immediate compensation to the peasants whose cotton crops have been damaged by white fly, lifting of Basmati 1509 by government agencies at MSP (Minimum Support Price) and payment of arrears of sugar cane growers. A demand has also been made to compensate the agricultural workers where cotton crop has been damaged.

The dharnas were organized in front of Deputy Commissioners’ offices and memorandums were submitted to the Chief Minister through the Deputy Commissioners. The leaders of the four Left parties jointly presided over the dharnas at all the district centres. Besides State Secretaries of the Four Left Parties , state level and district level leaders addressed the dharnas at various centres.

Com. Charan Singh Virdi, State Secretary of CPI(M), while addressing the gathering at Sangrur said that the peasantry in Punjab is under heavy debt due to the anti-peasant policies of the Central and Punjab governments and due to not getting beneficial  procurement price for agricultural produce. He said that Punjab peasants who contribute a big share to the national grain pool are committing suicide due to pro corporate policies of the central and state governments. The cotton crop has been spoiled in Punjab due to white fly and sub standard, spurious and duplicate pesticides and insecticides.  He termed the negligible compensation through cheques of Rs 11, Rs 28 and Rs 42doled out by the state government as a cruel joke with peasantry.

Com. Mangat Ram Pasla, State Secretary, CPM Punjab while addressing the rally at Jalandhar  demanded Rs 15 thousand as minimum wage for the industrial workers, Rs 3000 per month as old age/widow pension, unemployment allowance to unemployed youth, filling up of all vacant posts in government departments and implementation of the Swaminathan Commission recommendations.

Com.Gurmit Singh Bakhtpura, State Secretary CPI(ML-Liberation)addressed an impressive dharna at Gurdaspur and condemned the callous attitude of the Badal led Akali-BJP government  towards the crisis ridden peasantry in Punjab. He said that every alternate day there is  a news of suicide by some peasant in Punjab but the government is unmoved.  He announced that the four Left parties will continue their agitation in support of the peasantry and agricultural workers till their demands are satisfactorily settled.