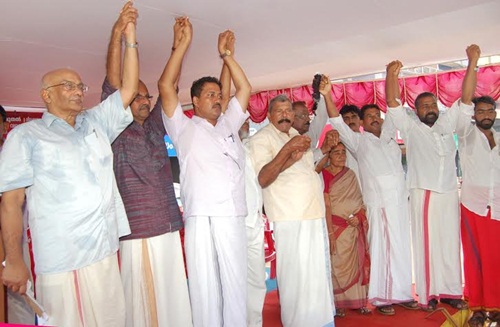 An estimated 25 lakh people participated in the 1000 km long dharna in Kerala registering an emphatic protest against the disastrous policies being pursued by the BJP-led Central Government and the Congress-led UDF government in the state. This massive action was part of the countrywide campaign being conducted by the Party from August 1 to 14 on the various burning issues affecting the rural people due to the deepening agrarian distress.

People from all walks of life participated throughout the length and breadth of the state on August 11 endorsing the call of the Party and pledging to continue the fight against policies that were heaping misery on them.

One end of the hour long protest which began at 4.00 p.m. was at Manjeswaram in the northern tip of Kerala, while the other was at the Rajbhavan in Thriruvananthapuram. While CPI (M) politburo member S Ramachandran Pillai participated in Manjeshwaram, General Secretary Sitaram Yechuri participated at Raj Bhavan. Besides Yechuri, CPI(M) state secretary Kodiyeri Balakrishnan and Polit Bureau member Pinarayi Vijayan addressed the gathering at Thiruvananthapuram.

Apart from CPI (M) workers, people from different walks of life -- freedom fighters, writers, actors, cultural activists, film personalities, leaders from other political parties, student, youth and women -- participated. Five hundred public meetings were also held simultaneously. At the culmination of the program, the participants took an oath to continue their fight against these anti-people policies.