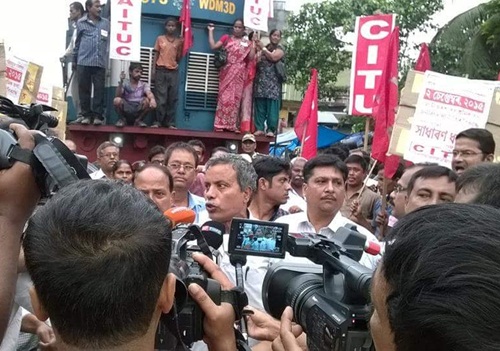 West Bengal observed a total General Strike on Wednesday braving terror and attack by TMC and state administration. Industries, shops and establishments, educational institutions remained closed. Kolkata streets were deserted. State government has forced state roadways buses to ply though in much less number than usual, with very few passengers. Transport in private sector and in districts have been hit hard. Power generation has declined in Kolkata and districts upto 30 per cent. 202 tea gardens were closed in three districts in northern Bengal out of 210.

Trade Union activists and workers of 17 Left parties were in streets in thousands. Road and rail blockade were organized throughout the state. Rallies, processions, street squads were seen everywhere. In Kolkata, leaders of 17 Left parties including Biman Basu, Surya Kanta Misra marched in a rally. It was the most memorable intervention by Left forces in recent history.

TMC and police combined to attack strikers in many places. In Baharampur in Murshidabad district, TMC brought anti-socials and attacked CPI(M) district committee office. They mercilessly beaten CPI(M) workers and instead of protecting them police attacked Party workers. At least 10 CPI(M) activists including former MP Mainul Hassan have been seriously injured.

In Hariharpara in Murshidabad, CPI(M) office was attacked and many Party leaders suffered injuries.

Strikers were attacked in various places in North 24 Parganas, West Midnapore and Burdwan. In Jalpaiguri, tea garden workers unitedly clashed with police in a tea garden. CPI(M) and trade union leaders were arrested.

However, the mood of resistance among the people was so high, that TMC activists were not even visible in most areas. It has been identified as a total defeat for Mamata Banerjee.

17 Left parties called statewide protest rallies tomorrow, condemning attacks on strikers. In a press conference, Biman Basu warned that as long as the attack would continue the protests would follow.