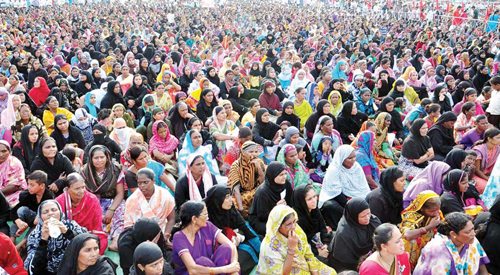 July 24, 2016 was a special day in Solapur. The massive Home Maidan saw a huge 70,000-strong rally of unorganised workers – an overwhelming number of whom were women, including Muslim women in thousands – to celebrate the eventual sanction by the central and state governments of a scheme for building 30,000 affordable permanent houses for unorganised workers. The sanction came after a prolonged struggle that was led by the CPI(M) and CITU. CPI(M) general secretary and leader of the Party’s parliamentary group Sitaram Yechury played a major role in getting this scheme sanctioned from the central government. The entire city had been turned red with banners, flags and hoardings.

CPI(M) state secretary, CITU state president and ex-MLA Narasayya Adam, under whose leadership the housing scheme was piloted, was felicitated on the occasion by CPI(M) central secretariat member and AIKS national joint secretary Dr Ashok Dhawale, who was the chief guest at the function. The public meeting was presided over by Nalini Kalburgi, the chairman of the Ray Nagar Federation, which is the name of the sanctioned housing scheme. Those who also addressed the meeting were CPI(M) state secretariat member and Solapur district secretary M H Shaikh and secretary of Ray Nagar Federation Yusuf Major.

On this occasion, out of the voluntary contributions made by thousands of unorganised workers of Solapur, a Toyota Innova car was presented to Narasayya Adam amidst cheers.

Ten years ago on September 1, 2006, a novel scheme of 10,000 low-cost houses for women beedi workers named the Comrade Godutai Parulekar Housing Scheme with equal contributions from the workers and from the state and central governments was completed and inaugurated in a one lakh-strong massive public meeting at Kumbhari near Solapur by the then prime minister Dr Manmohan Singh, in the presence of the then chief minister Vilasrao Deshmukh, CPI(M) Polit Bureau member Sitaram Yechury, CPI(M) state secretary Dr Ashok Dhawale and chief promoter of the project Narasayya Adam. 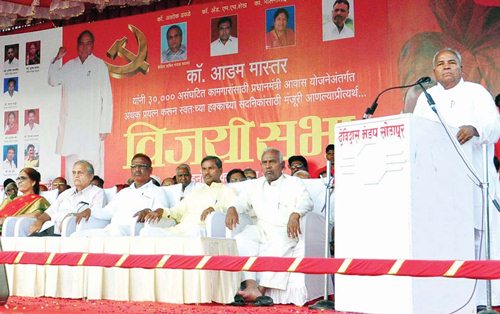 Speaking on the occasion Narasayya Adam related the long and bitter working class struggle that had to be waged for several years for the sanction of this scheme. He criticised the previous Congress chief minister Prithviraj Chavan, the former union home minister Sushil Kumar Shinde and his daughter and current MLA Praniti Shinde, for refusing to clear the scheme for over four years when they were in power, to serve their own selfish political ends. This delay has led to a massive escalation of costs to the tune of Rs 750 crore. He said that it was now planned to complete this scheme by 2018 when keys of the new houses could be given to all the member applicants. Also to be built at Kumbhari near the earlier completed housing projects, it will include all basic infrastructure and amenities like schools, college, hospital, market, places of worship, roads, water and electricity. He congratulated all the unorganised workers for their unrelenting struggle which led to the victory today.

Dr Ashok Dhawale warmly congratulated Narasayya Adam, the entire team of CPI(M) and the CITU activists in Solapur and the mass of unorganised workers who struggled relentlessly for years to bring this housing scheme to fruition. Speaking on the burning problems that unorganised workers face every day of their lives and the refusal of successive governments to address these issues, he gave a clarion call for making the September 2 nationwide strike a massive success. He also called for a unity of left democratic forces against capitalist and communal parties to fight the state wide local body elections in Maharashtra that will be held early next year.

The public meeting was also addressed by M H Shaikh, Nalini Kalburgi and Yusuf Major, who called for strengthening the unity of the working people not only for the successful completion of the housing scheme, but also to combat the manifold challenges faced by them and by the country. It was conducted by Anil Wasam. The Praja Natya Mandal presented revolutionary songs. The public meeting ended amidst tremendous enthusiasm.