In Kerala, the CPI (M) led Left Democratic Front has emerged victorious in 5 Municipal Corporations out of 6. It won in Thiruvananthapuram, Kollam, Kozhikode. Trissur and Kannur. All five Mayors of LDF are from CPI (M). Only Kochi went to the Congress.

In the recently concluded local bodies elections, LDF won 43 Municipalities out of 86, UDF won 38 and BJP and Development Front won one each.

Congress rebel P K Ragesh who won in one of Kannur Corporation wards, voted for LDF’s mayoral candidate E P Latha in the Mayoral election. Both fronts had won 27 seats each and one seat was held by Ragesh. Despite the Congress leadership’s attempt to woo the rebel, he extended unconditional support to LDF. The Deputy Mayor post was won by UDF candidate by toss of coin.

Young advocate and DYFI leader V K Prashant emerged victorious in Thiruvananthapuram Corporation. LDF got 42 votes and the BJP got 34. In Kollam, V Rajendrababu from CPI(M) emerged as Mayor with a thumping majority. In Kochi, Congress candidate Soumini Jain won with 41 votes against her LDF opponent who got 30 votes. Two BJP members and one independent abstained from voting. In Thissur, Ajitha Jayaraj of CPI (M) emerged victorious with 26 votes. In Kozhikode, former MLA V K C Mammad Koya was elected Mayor. 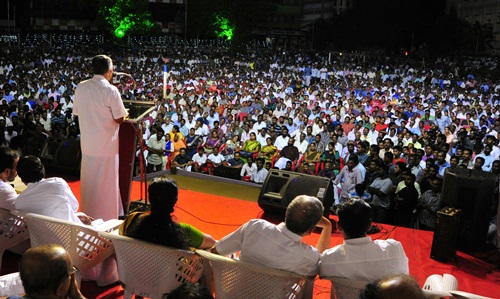 In Thiruvananthapuram and Kollam, CPI(M) candidates won in all Municipalities. There are four Municipalities in each district. In Pathanamthitta, both fronts shared two each. In Alappuzha and Kottayam LDF won two and UDF won four. In Idukki UDF won both two municipalities.

In Eranakulam district, election in Kalalmasseri Municipality was postponed as members from Congress factions did not fall in. In this district LDF won four and UDF won six municipalities. In Thrissur, LDF won 7 out of 8. LDF lost the Iringalakkuda  Municipality as one councilor’s vote became invalid.

In Malappuram, Kondotty Municipality was won by Vikasanamunnani led by LDF along with other three. UDF won eight. In Kozhikode district LDF won four and UDF won three. In Wayanad, Sulthan Batheri was won by LDF as a Kerala Congress Councillor took a stand against UDF. Kalpetta municipality chairman election was postponed due to factional feud in Congress. In Kannur, LDF won 5 and UDF won 3. In Kasargode, LDF won two and UDF won one.