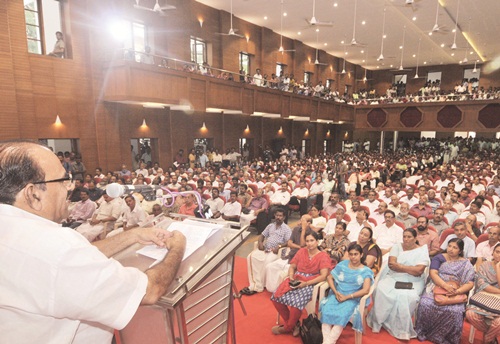 CPI(M) Polit Bureau Member and Kerala State Secretary, Kodiyeri Balakrishnan appealed to the Sree Narayana Dharma Paripalana Yogam to stand alongside the Party in the fight against the communal forces. Kodiyeri was inaugurating a seminar organised by the T.K Ramakrishnan Cultural Centre on ‘Threat of Communalism in Secular Kerala’, in Kochi on  September 11, 2015.  He accused the BJP of trying to distort the ideology and philosophy of Sree Narayana Guru. He criticised the RSS for its attempt to appropriate the legacy of freedom fighters and great personalities. Kodiyeri castigated the outfit for its attempt to polarize in Kerala on religious lines by joining hands with community based organisations.

Renowned human rights activist Teesta Setalvad delivering the keynote address said that "Communal forces are underplaying great leaders of history if not eliminating them and are trying to appropriate social reformers like Sree Narayana Guru and Ambedkar. Those forces hide certain part of history from our youth. We need to ask what kind of future generation we want or what thinking process we need. Now there is a quick shift in identity-based crisis. The Gujarat model of development, which is a jobless model, is being implemented at the national level as well. The best alternative- the Kerala model -has to be projected in counter to that”.