Left Front snatched  a significant victory today as it won Siliguri Mahakuma Parishad. Elections to three-tier panchayet in Siliguri sub division in Darjeeling district were held on October 3. Elections in Siliguri were peaceful except for some sporadic incidents. People of the rural and semi-rural areas, tea gardens squarely defeated TMC. 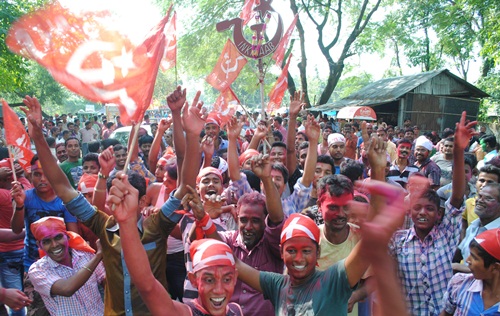 Left Front won 6 seats out of 9 at Council level (as a separate hill council exists in Darjeeling hill areas, the rest of the district falls within Mahakuma Parishad). At block level Panchayat Samity, the Left Front won 2 , the rest two are hung. It is expected that the Independents would support the Left Front in the board formation. Left Front won in Matigara and Kharibari, while Naxalbari and Fansideoa gave a hung result. Out of 22 village level Panchayet bodies,  Left Front won 10 and has an edge in another 3. The TMC could win only in 4.

It may be recalled that in April this year, the Left Front had won the Siliguri Municipal Corporation. After the city, rural areas too reposed confidence in the Red Flag.

Elections to Asansol , Bidhan Nagar and Bali as added area to Howrah corporations also took place on October 3. These elections were marred by unprecedented violence and unabated rigging. Opposition workers and voters were attacked, booths were captured. Even journalists were badly beaten up. Strong adverse reactions throughout the state and protest from opposition parties forced the state election commission to postpone the scheduled counting of votes in those three areas. Meanwhile, under pressure from state administration the state election commissioner resigned from his post, exposing the authoritarian nature of Mamata Banerjee rule.

In this background, the victory of Left Front in Siliguri has been hailed throughout the state. Hundreds of people came out on the streets in Siliguri and expressed joy.