A Seminar on ' Agriculture Crisis In Punjab And Its Solution' was held on 23rd January, 2016 at Chandigarh as  part of a series of programmes being organised by the Punjab State Committee of CPI(M) in connection with the observance of the birth  Centenary of Comrade Harkishan Singh

Dr. Balwinder Singh from Punjabi University said that the  reason for suicides of  peasants is not confined to agriculture crisis alone but it is also directly related to out of reach education and health services. He further said that there is virtually no significant development in agricultue research. He quoted a survey to say that that only 10 percent peasants are members of Kisan organisations and underlined the need for them to get organised and launch struggles. 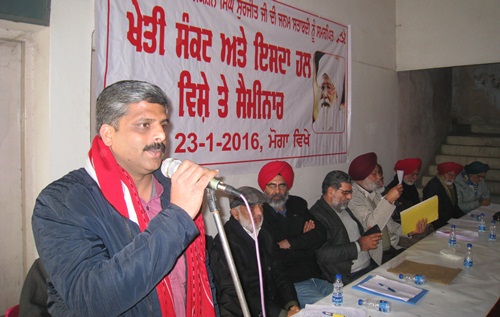 Prof. Harbans Singh Sidhu, former Chairman, Punjab School Education Board said that the root cause of the agrarian crisis lies in the new agrarian technology itself and the subsequent anti-farmer policies being pursued by the Indian State. He further said that while the Indian State is extremely benevolent to corporte houses and big business, it has no funds to support the hands which feed the nation.

Vijoo Krishnan, Joint Secretary, All India Kisan Sabha and Central Committee Member, CPI(M) while speaking on the occasion said that if the peasants are committing suicides in Punjab which contributes major share in the central food pool, the condition of peasantry in other states can be well imagined. He explained in detail the reasons for crisis in agriculture sector and continuous fall in budgetary support for agriculture and irrigation by successive governments. Globalisation and WTO have played havoc for Indian agricuture.

Charan Singh Virdi,  Secretary, Punjab, CPI(M) thanked the experts and participants and hoped that  the inputs will help in planning  strategy and  struggle to force the government to adopt pro-agriculture and pro-peasantry policies.