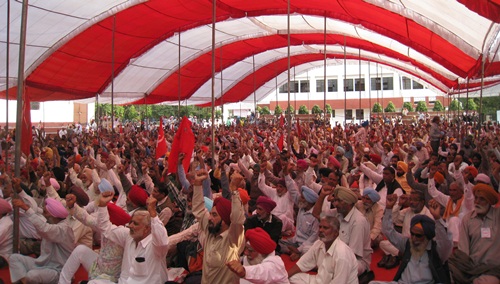 At a massive joint convention held at Jalandhar on 6 November 2015, the Punjab units of four Left Parties - CPI, CPI(M), CPM Punjab & CPI(M-L) Liberation - declared that a sustained mass struggle will be launched for settlement of the 15 Points Demand Charter. More than 3000 workers, peasants and other sections of working people participated in this convention.

It was announced that in the first phase of action a Jatha March will be taken out in all the districts from 1st December to 7th December to organise and mobilise the people at village level   for joining the decisive battle for the burning demands of the working people.

Comrade Joginder Dayal, National Council Member, CPI condemned the criminal negligence of the Badal led Akali-BJP government of Punjab and the Modi led BJP government at the Centre towards burning problems of the people. He declared that the sustained struggle launched by the four Left Parties will continue till the peoples' issues are satisfactorily settled.

Comrade Charan Singh Virdi, State Secretary, CPI(M) alleged that the Badal and Modi governments instead of taking serious steps for solving the burning problems like price rise, unemployment, corruption, etc. are fanning religious and communal issues to divert the attention of the people. He condemned the failure of the Badal govt. in controlling repeated incidents of sacrilege of Guru Granth Sahib which may give a handle to the fundamentalist forces to damage the social and religious fabric of the state. He appealed to the people to maintain peace and communal harmony and defeat the designs of the government and the extremist elements.

Comrade Hardev Arshi, State Secretary, CPI demanded immediate lifting of the crops by the government agencies to save the peasantry from harassment, Rs 4500 as procurement  price for Basmati 1509 and Rs 5000 for Basmati 1121. He also demanded Rs 40 thousand per acre as compensation to the peasants whose cotton crops have been damaged by white fly.

Comrade Mangat Ram Pasla, State Secretary, CPM Punjab condemned the Akali-BJP government led by Parkash Singh Badal for its failure to break the drug mafia nexus with  police and politicians. He also came down heavily on the Badal government for failing to control atrocities on women and dalits in the state.

The Presidium declared that to realise the 15 points demand charter, after the initial Jatha March in all the districts, 500 political conferences will be held all over the state in January, 2016 followed by massive protest demonstrations at district level in February, 2016.

An impressive Peace March (Aman March ) was taken out through the main bazars of the city  after the convention in which more than 3000 people participated. It was led by the State Secretaries of the four Left parties. The participants raised slogans in support of peace and communal harmony and against fundamentalist forces which wants to disturb the peace in Punjab.