In a move of blatant repression, the Andhra Pradesh police arrested CPI(M)  State Secretary P Madhu on August 12 morning as he got down from a train in Srikakulam. He was moved from one police station to another and detained for more than 10 hours. Disregarding the fact that he is a senior leader of a national political party and also a former Member of Parliament, the AP police snatched his mobile phone and prevented party activists from visiting him in custody. In fact, they even arrested those who tried to meet Madhu.

Madhu reached Srikakulam to visit the eight villages in the district that have been targeted for land acquisition for the Polaki thermal power project. The state government is acquiring 1890 acres of land forcibly from the farmers in these villages. Thousands of agricultural labourers and artisans in these villages will see their livelihoods affected badly due to this land acquisition. Many environmentalists and social activists have expressed concern about the setting up of the 4000 MW thermal power plant here by Japanese company Sumitomo. The people of these eight villages have also strongly opposed this plant. In such a situation, CPI(M) state secretary was visiting the villages to know first hand the concerns of the people. But he was arrested as soon as he reached Srikakulam. 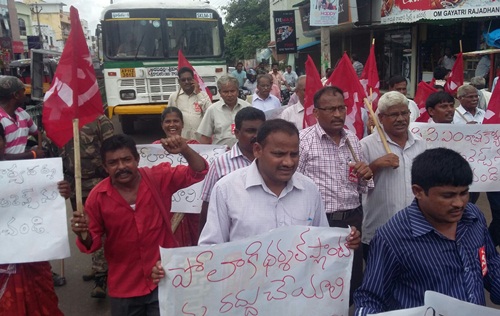 CPI(M) Polit Bureau member B V Raghavulu, leaders of Left parties in AP, CPI(M) Telangana state secretary Thammineni Veerabhadram and many others strongly condemned the repressive move of Chandrababu Naidu government. They demanded his immediate release. They warned Chandrababu Naidu that there would be greater resistance movements if he sought to crush the basic democratic rights. Protests were held across the state against the arrest of Madhu.