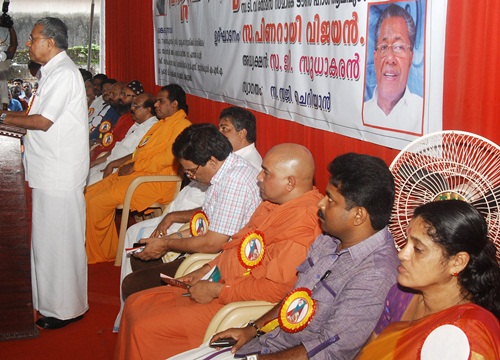 CPI(M) Polit Bureau Member Comrade Pinarayi Vijayan said that the Sree Narayana Dharma Paripalana (SNDP) is not just a caste organization but based on the dharma propagated by Sree Narayana Guru. Alluding to the current SNDP leadership which is getting cozy with the BJP, Pinarayi said that “anybody who is aware of these facts will not go for any unholy alliance with RSS”.

He was speaking at a seminar against communalism at Alappuzha, Kerala organized by the Suseela Gopalan Study Centre, on September 11, 2015.

Stating that the effort to tie the SNDP with the RSS is part of the RSS’s attempt to consolidate caste organizations, he warned that these efforts to diverge from the visions of Sree Narayana Guru will be strongly opposed. He also underlined, that as opposed to this, the CPI(M) is trying to uphold the greatness of Sree Narayana Guru’s visions.

He also wondered how the communal ideology of the RSS could go together with Sree Narayana Guru’s teaching of ‘one caste, one religion, and one God for mankind’.