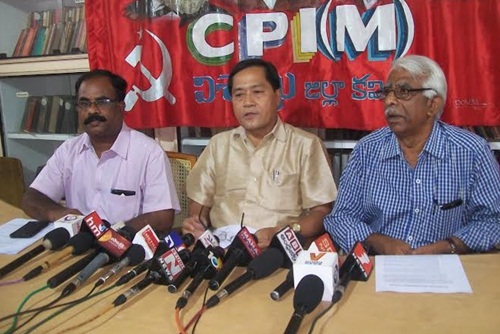 At a press meet held in Visakhapatnam, CPI(M) MP Jitendra Choudhary, CPI(M) Andhra Pradesh state secretariat member Ch. Narasinagrao and Visakhapatnam dist. secretary K. Lokanadham, condemned the TDP government in Andhra Pradesh and BJP-led NDA government at the Centre for paving the way for corporate loot of precious natural resources. By undermining the law of the land and environmental rules, the state and central governments are causing huge revenue loss to the public exchequer and also destroying the social, economic and cultural base of the country.

Highlighting one of the most brazen acts of public loot, Jitendra Choudhary said that the CAG report No. 5 of 2014 on the Public Sector Undertakings for the year ended March 2013 had observed that the MoU signed by the previous Congress Government with Jindal South West Holding Ltd. and Ras Al Khaimah of UAE during 2005-2007 was aiming to loot bauxite ore, a precious natural resource, from the picturesque Araku Valley.

He said that the following aspects were highlighted by the CAG report:

ii)                  APMDC has been maintaining 11% share in leases for other natural resources like granite,beach sand, etc. But in the case of bauxite, this was reduced to only 1.5%, causing huge revenue loss.

Choudhary said that bauxite is a poisonous ore. Indiscriminate and unregulated mining and processing has profusely degraded the quality of water and land in Araku Valley. No provision for checking the environmental degradation had been entered into the agreement. This will have long run effect to the life and economy of the valley.

As per the MoU point ix only 0.5 % revenue from the value added project shall be spent for the tribals on health, training etc.

In 2012, Union Tribal Affairs Ministry directed that the mining should be stopped as it was damaging the lives and land of tribal communities. But AP Chief Minister, Sri Chandra Babu Naidu’s declared on 9th August, 2015that mining will be resumed, revealing his commitment to pro-corporate and anti-people policies.

The Communist Party of India (Marxist) and Adivasi Adhikar Rashtriya Manch (AARM) strongly condemn the resumption of mining, Choudhary said. He declared that the issue will be raised in Parliament against BJP-led Central Government and TDP-led State Governments.

Choudhary also condemned the indiscriminate violation of Forest Right Act in BJP ruled States, undermining rights of tribals and other forest dweller. He gave several examples of this:

ii)                  On June 4th, the Madhya Pradesh Government issued new village and protected forest rules that are even more grossly illegal than the Maharashtra rules. They reduce forest dwellers to mere collectors, force them to comply with plans of the Forest Department, and indirectly permit private companies to be involved in forest management. No response has been forthcoming from the Central Government in this regard.

iii)                On July 27th, the State Government of Chhattisgarh issued a letter to all District Collectors directing them to obtain certificates from Gram Sabhas that implementation of the Forest Rights Act is "complete" by August 15th. Since very few community forest rights have been recognised in the State, this is clearly illegal and an attempt to pre-empt proper implementation of the Act. No response has been forthcoming

iv)                The Environment Ministry is proposing to pass the Compensatory Afforestation Fund Bill in Parliament, notwithstanding the fact that an almost identical bill was unanimously rejected in 2008 by the Standing Committee on grounds, among others, that it would violate the rights of forest dwellers. The Bill makes no reference to forest rights at all and will encourage the takeover of large areas of common land in the name of "compensatory afforestation" by the Forest Department.

CPI(M) and AARM will mobilise the common masses against this anti-people policies of the BJP and its allies, and shall oppose them tooth and nail, wherever it occurs, Choudhary said.