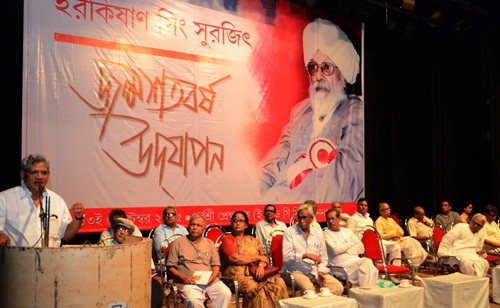 CPI(M) General Secretary Sitaram Yechury stated  that the actual control of Modi government lies with RSS. Addressing a public meeting commemorating birth centenary of Comrade Harkishan Singh Surjeet in Kolkata, on September 13, Yechury said that the BJP used to castigate the Manmohun Singh government by saying that its remote control lies with Congress President. But in case of Modi government, the RSS is its real control.

Yechury said, the threat of majority communalism has intensified many times after the Modi government came in to power. The attitude of this government towards minority is susceptible. Law is not equal to them. Recalling Surjeet’s immense contribution to the fight against communalism, Yechury said, his efforts made possible the formation of UF government in 1996 when secular forces were united. Again in 2004, Surjeet took lead in keeping away BJP from power even though Congress got only 145 seats. Yechury said, tactics of Communists in fighting against communal forces are twofold: develop independent strength and decrease the force of enemy.

Yechury said, in West Bengal TMC is in match fixing mode with BJP. Through this Mamata Banerjee is trying to shield from CBI inquiry in the Sharada scam. On the other hand, the Left forces are advancing. In the last one month huge peoples’ struggle have been unleashed. The fight by the Left in Bengal is creating enthusiasm among the people in other states too.

Surya Kanta Misra and Biman Basu also addressed the meeting. Biman Basu outlined the struggling life of Surjeet as a freedom fighter, peasant leader and one of the tallest Communist leaders of the country.

A book was released in Bengali on the life of Surjeet.