Budget 2020: How Modi Govt. Destroyed the Economy and Squeezed the People

In the Union Budget presented before Parliament on 1 February 2020, a vivid and shocking picture of how the Modi led BJP government has destroyed India’s economy emerges. It also reveals exactly how a rich man’s sarkar goes about brutally increasing the burden on people in order to continue handing out concessions to the corporate world and turning the whole country into a source of profit.

Due to neglect, mismanagement and perversion of priorities, the Modi govt. created a slump in the Indian economy. This has led to a massive dip in the govt.’s revenue. Gross tax revenue fell by Rs.2.98 lakh crore in a single year, a decline of over 12% over the target kept in Budget last year. Revenue from customs  and excise duties fell by Rs.30.9 thousand crore and Rs.51.99 thousand crore respectively. That’s a staggering dip of nearly 20% for customs and over 17% for excise duties. The GST collections fell by Rs.51 thousand crore, an 8% decline.

In the face of this devastating slump, and knowing that revenues were sliding relentlessly, the Modi govt. announced a cut in corporate tax in August last year. Due to this, the revenue from this only major direct tax on corporates fell by Rs.1.56 lakh crore! That’s an unheard of dip of over 20%. 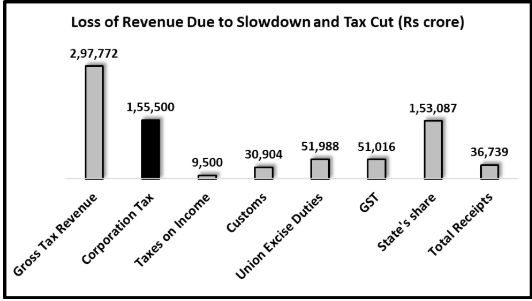 In a shameless attempt to hide these tax revenue declines and balance its books, the Modi govt. took an even more unprecedented step. It refused to pay the States their share of revenues as statutorily required. This cut amounted to Rs.1.53 lakh crore. This means that States were now bearing the burden of the Centre’s policies, including the corporate freebies. With this ‘saving’ the Modi govt. managed to cover up a chunk of the losses and show in its books a total decline of only Rs.36.74 thousand crore. Meanwhile States were grappling on how to go about fulfilling their responsibilities without this mandated funds.

In such a way, the Modi govt. covered up its partisanship towards the corporate section and cocked a thumb at the people and the state governments. It also covered up the devastating effect of the slowdown in the process.

The Expenditure Budget for last year presented in this Budget reveals how the Modi govt. passed on the whole mess on to the people. Remember: people across the country were already reeling under massive unemployment, price rise, loss of existing jobs, and cuts in income as a result of the slowdown. In such a dire crisis, not only were they expecting a strong move from the Modi govt. to provide some relief, but increasing govt. spending would have also been a good way of tackling the crisis. More money spent by the govt. could have pumped up the buying power in the hands of people, which would in turn increase demand for goods and services, thus pushing up the economy.

But, blinded by the dogmatic belief in neoliberal policies, and ever sensitive to what global capital would like or dislike, the govt. adopted the very opposite policy. Over the year, it reduced spending on central sector schemes by over Rs.97.6 thousand crore, while funds for centrally sponsored schemes (like MGNREGA, PMGSY, etc.) were cut by Rs.14.79 thousand crore. In addition, various other central expenditures were cut by Rs.30.58 thousand crore. 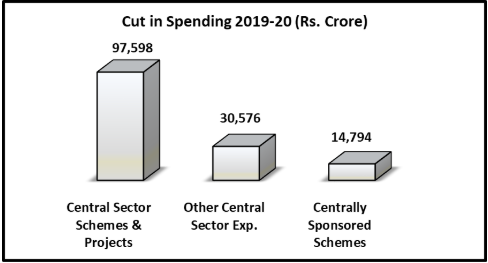 The impact of this was that diverse schemes and programmes suffered – work in MGREGA to house building in PMAY, to rural road building (PMGSY) and so on. Directly or indirectly, this squeeze added to the misery and distress of people.
What it showed to people was that the Modi govt. doesn’t care for them. It is willing to sacrifice them for the benefit of corporate (both domestic and foreign) sections.

For getting a clearer picture of the all round nature of this policy of funds squeeze, take a look at the chart below. 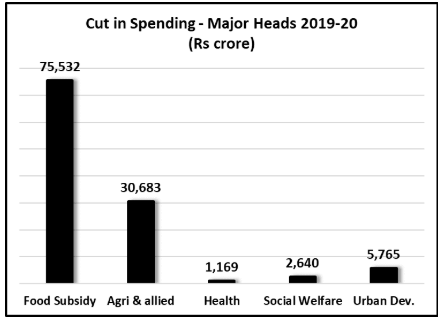 Food subsidy, which ensures that food grain reaches people at affordable prices, was cut by over Rs.75.53 thousand crore. Spending on health went down by Rs.1169 crore. Even spending on agriculture and allied sectors (like fisheries) suffered a squeeze of Rs.30.68 thousand crore. These are cuts that would affect large number of people and on life and death issues.

That the Modi govt. was willing to do this so that it could fill up corporate pockets is a bitter lesson being learnt by Indians. It’s a great betrayal for those who voted Modi back into power just a few months back. Combined with all the other disastrous decisions recently taken by this govt. to fan communal flames and encourage strife among people, the Modi govt.’s record stands tarnished beyond any redemption.