[The first two articles in the series dealt with the impact of COVID-19 lockdown on agriculture and rural employment. This article deals with the public distribution of foodgrain during the lockdown.]
The situation of Indian economy and government’s finance was already precarious when the Coronavirus pandemic hit India. In that context, one of the few things that could be seen as a silver lining was that the government was sitting on massive stocks of foodgrain. These stocks, it was hoped, could be used to prevent widespread hunger and provide a fillip to demand during the period of the lockdown.
In the third and the last article in this series, we argue that, in its obstinate allegiance to neoliberalism, the government has chosen to squander even this advantage. Over the period of the lockdown, it has hoarded more grain than distributed and has allowed the grain to rot rather than feed the hungry.
Food Stocks on the Eve of the Lockdown

Over the last three years, the Food Corporation of India (FCI) has been sitting on a massive, excess stock of foodgrain. Before we discuss how the government has failed to use these stocks to effectively deal with the present economic crisis, and to understand the political economy of food policies of the NDA government, it is relevant to discuss how the government came to be holding such a large amount of grain.

Stocks held by the FCI include grain required to meet operational requirements of government programmes such as the public distribution system as well as grain held as a strategic reserve to meet exigencies or any shortfalls in production (and procurement). The stocking norms of the government specify the quantity of grain that the FCI should hold at different points of time in a year. However, over the last three years, the FCI has steadily accumulated more and more excess stocks than it needs to hold as per the norms. As shown in Table 1 and Figure 1, the amount of surplus stocks held by the government has steadily increased after October 2018 and, by May 1, 2020, the government has 878 lakh tonnes of grain (including unmilled paddy), which was 668 lakh tonnes in excess of the stocking norms. Why has the FCI been holding such a large surplus of grain?

Figure 1. Surplus stocks above the stocking norms held by the Food Corporation of India, December 1, 2014 to May 1, 2020 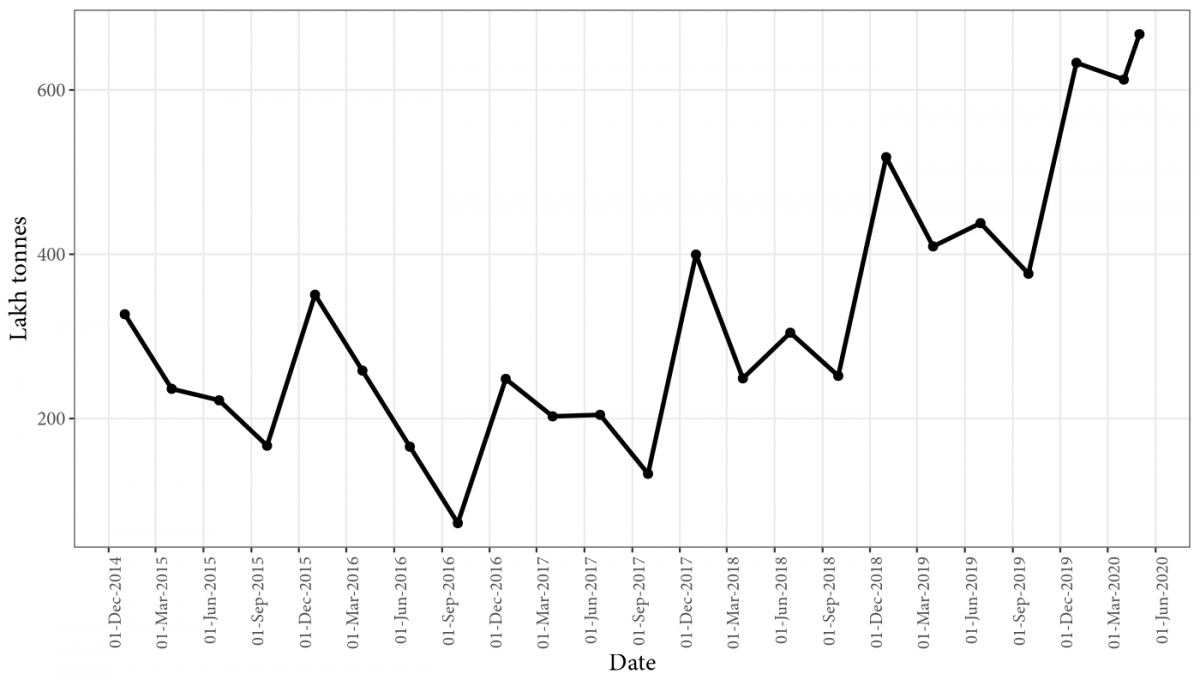 Such a large surplus of stocks is held by the FCI because the BJP government has been unwilling to expand the coverage of the schemes such as the public distribution system (currently run under the provisions of the National Food Security Act) through which subsidised food and foodgrain are provided. When the government offtakes the grain from the Food Corporation of India (FCI), it reimburses the FCI at economic cost of this grain, which includes the cost of procurement as well as storage and handling costs. However, since the BJP government is firmly wedded to the neoliberal dogma of fiscal prudence, it has chosen not to lift the grain to keep its fiscal deficit low.

In the past, even when the governments did not lift all the surplus food stocks that the FCI had, they covered most of FCI’s costs. However, under the BJP government, this was changed. As shown in Figure 2, in the last few years, less than 60 per cent of FCI’s food subsidy expenditure was covered by the government. While the Finance Ministers window dressed their own budgets and showed low fiscal deficit, the FCI was made to show losses in its books and cover them through borrowings. This window dressing has resulted in burdening the FCI, an organisation of strategic importance (as has become clear in the present crisis), with over 2.36 lakh crore debt (as of December 31, 2019). (Source: Annual Report, 2019-20, Department of Food and Public Distribution, Government of India.)

Figure 2. Proportion of food subsidy expenditure of FCI covered by the government (per cent) 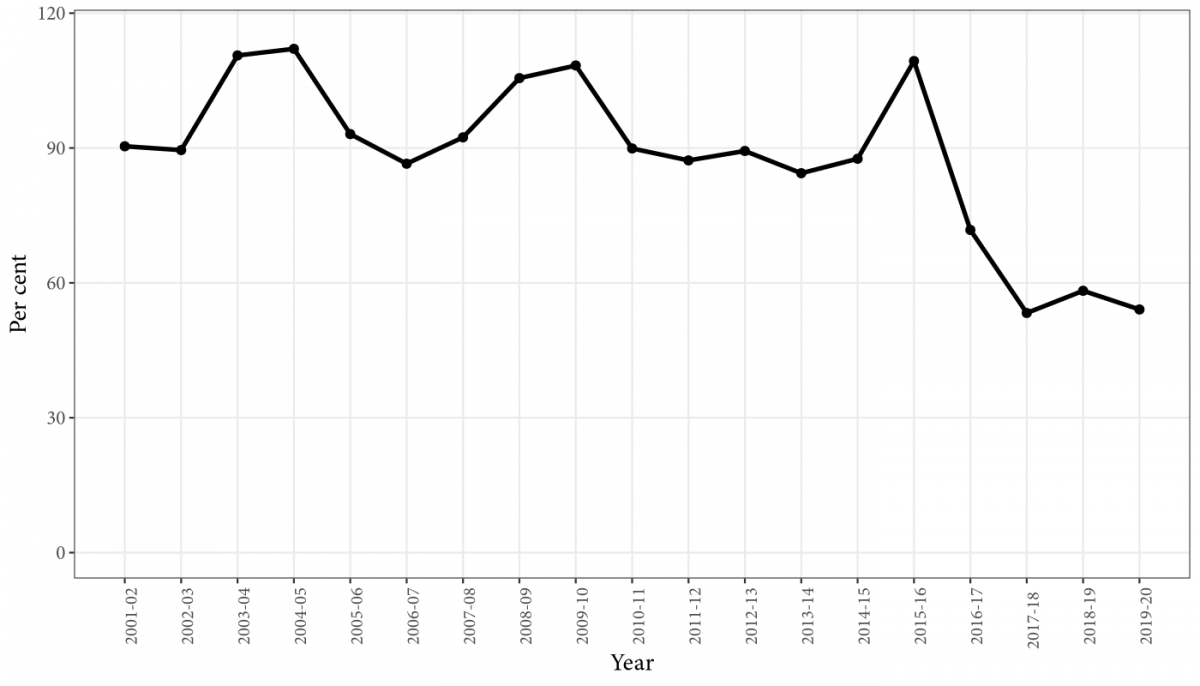 Source: Based on data from http://fci.gov.in/finances.php?view=22

The OMSS was created in the mid-1990s for the government to be able to intervene to moderate sharp rises in price of foodgrain in the open market. However, bulk of sales under OMSS are to State governments which have extended the coverage of the public distribution system and need grain for other State-level welfare schemes. OMSS has also been used since the early 2000s to sell surplus grain to traders and exporters at subsidised prices.

Table 2: Public stocks of foodgrain in March, April and May, 2020 (Lakh Tonnes)

Notwithstanding the reason why the government was hoarding of such a large stock of grain, the grain could still have been used strategically during the lockdown to alleviate distress and prevent exacerbation of food insecurity. This should have been a particularly attractive option to the government because, rather than increasing the fiscal burden, free distribution of this grain or using the grain for food-for-work programmes (or payment of wages in grain in schemes such as MGNREGS) would have reduced the fiscal burden of maintaining the large stocks. It is also relevant to mention that the government does not have capacity to properly store such a large amount of excess stocks and a significant part of it is likely to be damaged if it is not distributed immediately.

However, the government has been extremely miserly in releasing the grain for distribution among the poor. On March 26th, the Finance Minister announced that, under PM Garib Kalyan Ann Yojana (PMGKAY), “80 crore individuals, i.e, roughly two-thirds of India’s population” “would be provided double of their current entitlement over next three months” and that “this additionally would be free of cost”. It is obvious that, if the entitlements of the two thirds of India’s population (which is the population covered under NFSA) were to be doubled, the government should have distributed as much grain through PMGKAY as it does under NFSA. However, Table 2 shows that while the government distributes about 43 lakh tonnes of grain every month under NFSA, the total distribution of grain under PMGKAY was only 26 lakh tonnes in April and 29 lakh tonnes in May. In other words, the distribution under PMGKAY was far short of what was needed to double the distribution of grain through NFSA.

Table 3. Distribution of grain through the National Food Security Act and the PM Garib Kalyan Ann Yojana in March, April and May (upto May 22), 2020 (lakh tonnes)

Note: Data for May are up to May 22.
Source: https://annavitran.nic.in/

Not only was the grain provided through PMGKAY was far less than what was promised, a complete lack of planning and haphazard decision-making also resulted in delays and large-scale exclusion in distribution of the grain. In several States, no distribution could take place in April. In many States, households only received the usual amount of grain and no additional free grain was provided by the ration shops.

Nothing reflects the insensitivity of the current government towards the misery that has been inflicted upon people more than the fact that during this period, instead of emptying its granaries, the Central government has increased the amount of grain it is hoarding. In April and May (until May 22nd), the government distributed a total of only 132.7 lakh tonnes of grain through NFSA and PMGKAY. This was less than even the additional amount it procured in the months of April and May (283 lakh tonnes until May 15th).

In the present situation, distributing the grain among the poor is the win-win strategy. It would help feed the hungry, would strengthen demand in the economy, and would lessen the burden of maintaining these stocks on FCI. Government needs to immediately universalise the public distribution system, allow State governments to distribute grain freely and provide it free for running community kitchens to ensure that nobody is short of food. A government that does not do this even in the time of such a crisis does not serve people’s interests.