It was a moment hard to define. Kumar's body lay inert, around which his Adivasi and non-Adivasi near ones had gathered in huge numbers, traveling overnight from far and near. Adivasis, among whom he had spent half a century, were not ready to accept the fact. Women wailed asking in unison, “Kumarbhau, parat ya”  (Brother Kumar, please come back). In that sea of tens of hundreds, a  large section of women among them, only one or two were his direct blood relations. In that collective mourning almost everyone  also felt the pain of the loss individually. The air was filled with a tangible sense of poignancy as well as with some kind of intangible energy, the seeds of which, the  person at rest, had sown in them. Was that inert body the soul and I, standing beside, mere body? Before I could suppress that unsettling thought, Jaysing Mali, Kumar's close confidante for decades, began to speak in the mike he held in his trembling hands. "Comrade ... ", and he paused. Was he groping for the right word, unsure of what he was going to say? One suspected. No, he was not referring to Kumar. The word comrade is both singular and plural in Marathi. Jaysing was addressing us. "Now is the time to bid farewell to Kumarbhau." He had not been able to overcome his initial hesitation. Then he gathered more than right words and continued, "We are now going to perform the last rites. We had planned for cremation. But all the Adivasis collected here said that he is one of us, we will perform our traditional rites. We have therefore decided that ...",  now his words were measured, tone firm, "we will bury, not cremate Kumar." 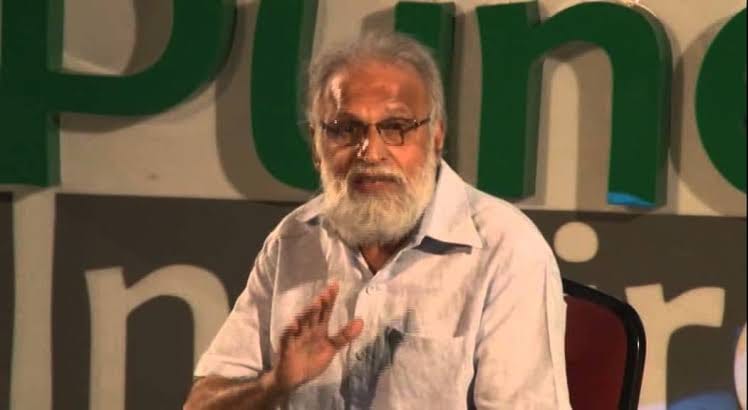 I was stunned. Honestly, it took quite a moment for me to digest what he was saying.

"Please, don't misunderstand, he belonged to us,"  Jaysing said with finality.

All readily agreed, of course. We had all taken a huge cultural leap. The collective began to move towards the assigned place, in the ground of the Com. B. T. Randive High School. A six-seven feet deep pit was already dug. Kumar's body, after a few rounds around the pit, slogans of ‘Lal Salam’ resounding,  was lowered in. It was symbolically fed with cooked rice and water mixed with jaggery. The latter would be an alcoholic drink for those born Adivasi. A compromise was made for Kumar. Each of us turned our back to him and put a handful of soil in the pit. What will he grow into?

Kumar was born a Brahmin. He did not die a Brahmin. His parental house must have been part orthodox part progressive. A lot of secularization has taken place in the way those kind of people live.

Kumar's funeral set me thinking. No Brahmin, orthodox or otherwise, Maharashtrian at least,  would be buried after death. I haven't heard of any instance where such a wish was ever made or carried out. One would wish to donate the body for medical education and experiment. That wish is not frowned upon much. This final act of burying Kumar is an act of solidarity steeled in the furnace of struggle. That would not be steeled if Kumar had carried his cultural baggage along with him.
Kumar had an ancestral house in the town of Miraj which boasts of both, admirable Hindu-Muslim amity as well as intermittent episodes of communal strife. Kumar's house was located in the Brahmin quarters. After he  joined the movement to fight the oppression of the Adivasis in Nandurbar district and gradually began turning that fight into a war to overthrow the system that begets various kinds of oppression and exploitation, he began shedding all the baggage given to him by custom. He sold the ancestral house and bought a small flat for his mother. He occasionally visited it in normal times (a rarity for Kumar). He took leave from the Party (he was a wholetimer) to nurse her in time of need. He had to again take leave from Party work to take care full time of his elder sister who was being treated in a sanatorium. All the attendant agonies and travails were strictly his personal affair. The pains and problems of others too he made his personal affair. He wanted to minimize whatever belonged to him, he was a person with few needs.

Once in a visit to our house he asked me for an old pair of chappals that I didn't use. His was badly broken. He had used it till the point it was useless to call it chappal anymore. I offered to buy a new one. He flatly refused and threatened to go away bare feet. I surrendered.

Kumar was briefly married. It must have been one of the shortest marriages ever. Once I poked him about it. "Arrey, you need to waste too much  time, I have better things to do," he said simply.

In the condolence meeting all the speakers tried to piece him together from whatever they had got from him. Some saw Gandhi in him, some saw Phule and still others, Ambedkar.  But all agreed, he was a communist to the dot.
As I sat listening to those speeches, I mulled over a thought. What kind of memorial could we build to cherish his memory? Museum of personal assets was out of the question. You don't leave anything personal behind, the Adivasi culture apparently demands. His backpack was placed beside his body and with him buried. A museum was a superfluous idea. Every house in those Adivasi hamlets is a museum of everything that he has left behind. Orhan Pamuk has written a novel called a Museum of Innocence. Every house in that area is a museum of Kumar's memories.

We all left in the evening. This morning a comrade sent me a message. Young Kumar having decided to bind his fate with that of these Adivasis began living since 1971 in the house of Narayan Thakare. The then seventeen year Narayan immediately became a comrade in arms and Kumar became a member of the Thakare family. That became his address. Kumar's name entered the Thakare ration card. The address on the Aadhar and voting cards too was that of the Thakares.

As Kumar's body lay in  wake, seventy odd years old Narayan was listening to the  condolence speeches. Nobody noticed Narayan  leave. At midnight Narayan had a massive heart attack and he too passed away.