The Greek Referendum & the Struggle of the Greek People - Prakash Karat

The Greek Referendum & the Struggle of the Greek People

THE Greek people have delivered a resounding “No” in the referendum held on July 5.  61.3 percent of those who voted rejected the harsh austerity measures which are sought to be imposed upon them by the neo-liberal “Troika” of the International Monetary Fund, the European Central Bank and the European Commission.  Accepting the bailout conditions would have meant further cuts in wages, pensions and more privatisation. Already Greece is burdened with an unsustainable debt which is 175 percent of its GDP. The bailout packages which were imposed on Greece have only gone towards repaying the interests and the installments of debt to the big banks of Europe and the IMF.  For the people, it has meant suffering with deep cuts in their wages, pension and social welfare measures.

Greece is part of the European Union which comprises 28 countries. It is also part of the Euro zone in which 19 countries share a common currency, the Euro.  The European Union, founded on the basis of the Maastricht Treaty of 1992, has been the supranational organisation which has enforced neo-liberal  measures on all its 28 member countries.  The European Commission and the European Central Bank are the unelected bureaucracies which supervise the economic guidelines based on fiscal  fundamentalism and inflation control.  For instance, every member country has to contain its fiscal deficit at 3 percent of the GDP. No EU member country is free to formulate budgetary and fiscal policies which give priority to the people’s welfare. The EU mechanisms have worked against the interests of the weaker capitalist countries like Greece, Portugal, Spain and Ireland while benefiting the richer capitalist countries of the North like Germany, France and the Netherlands.

Greece was worst affected by the global financial crisis which erupted in 2008 and in 2010, it had to accept a bailout plan which imposed austerity measures on the people as a condition for getting loans from the IMF and the European banks. There was a second bailout agreement in 2012. Both these bailout funds were used to help the Greek and European private banks. Thus the private corporate debt was converted into Greek sovereign debt.  Meanwhile, the Greek economy plunged into deeper crisis: in four years, there was a 30 percent loss of GDP and 26 percent unemployment. Youth unemployment has soared to 56 percent.  44 percent of the people have incomes below the poverty line.

The working class and all other sections of the working people have been struggling for the past five years without respite against this massive attack on their livelihood and rights.  The working class went on innumerable general strikes against the austerity measures.  The Syriza, which is a Left-oriented party, was elected in January this year.  It came to power on a platform that rejected the austerity measures,   promised to protect the wages and pensions of the people and halt privatisation. But the new government was hemmed in on all sides. It faced a financial crisis and was forced to sign an agreement on February 20 with the Troika which added more burdens on the people.  In four months time, the crisis further deepened with more unemployment and loss of revenue for the government.

Since June, in the negotiations, the European leaders along with the IMF have been demanding that Greece capitulate further and accept harsher measures if it wants to get another bailout.  Faced with an unenviable situation, Greek Prime Minister, Alexis Tsipras, on June 27 called for a referendum which was  passed by parliament to ask the people to accept or reject the bailout terms and conditions.  The referendum was held on July 5. In the meantime, Greece defaulted on the payment of an installment of 1.6 billion dollars to the IMF. Capital controls were instituted on June 28.

The results of the referendum show that the Greek people are ahead of the Syriza government.  They are totally against the continuation of austerity measures and more burdens being added on them. It is notable that 75 percent of the 18-25 years age group of young people voted “No” as they see no future in this rotten system.

The European big business, bankers and ruling classes have declared war on the Greek people.  The Greek people are being punished for electing a government which declared that it will not abide by the austerity regime. In the campaign for the referendum, the entire Greek mainstream media, the rightwing and mainstream political parties and big business vigorously campaigned for a “Yes” vote.  But the Greek people have stood firm in defence of their rights.

Democracy and national sovereignty is something which is anathema to the ruling establishment of the European Union. The call for a referendum and the democratic exercise by the Greek people was met with stunned disapproval by the Troika.  Some quarters openly called for change in government.

The Syriza, belongs to that stream of the European Left, mainly of the erstwhile Euro-Communists, which is strongly committed to European unity and the European Union.  That is why the Tsipras government goes on asserting that it wishes to continue with the Euro and in the European Union.  This is one of the dividing lines with the Communist parties of Greece, Portugal, Cyprus and other countries who see the EU as a project of big business and transnational capital. The Left platform within the Syriza has also been advocating the exit from the Euro. For the Syriza government, its reluctance to quit the Euro makes it vulnerable to the unscrupulous pressures of the Troika.

Unless Greece is provided a write-off on some of the debt, it cannot overcome the economic crisis and revive the economy. This is what the Syriza government has been demanding. But even after the referendum, the European financial oligarchy and the IMF are in no mood to do so. Once again, there will be negotiations by end of the week for a new memorandum of agreement.  Whatever concessions that will be made, they can only pertain to the degree of harshness of the austerity measures.  Any further cuts in wages, pensions, or increase in indirect taxes (VAT) on the people will be a monstrous crime.

The only way to end the austerity regime and the onslaught on the Greek people’s rights would be to quit the Euro and revive the old Greek currency, the Drachma.  The Greek banking system which is on the point of collapse will have to be nationalised.  This would, no doubt, be a difficult and painful transition. But remaining in the Euro zone on the terms of the Troika will condemn Greece to debt slavery and progressive loss of democracy and national sovereignty. 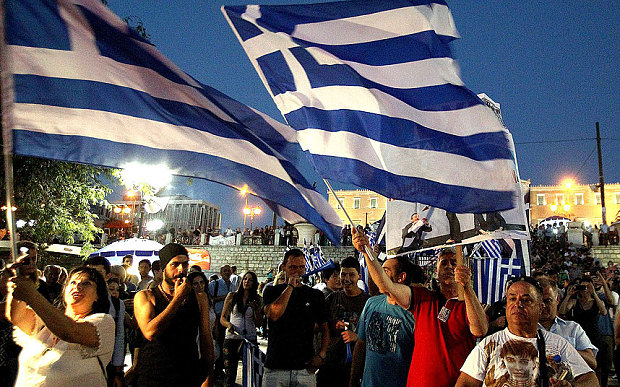