How to take care of friendly terrorists:Kiran

The revelation by Rohini Salian, the Maharashtra government’s special public prosecutor in the 2008 Malegaon bomb blasts case, that she has been pressurised by the National Investigation Agency (NIA) to go soft on the accused ever since the Modi government came to power brings into sharp focus the duplicity of the BJP and its government on the issue of terror and its implicit support to Hindu terrorist outfits.
During the UPA’s tenure, various elements of the sangh parivar had repeatedly imputed that the case against the main accused – Sadhvi Pragya Thakur and Lt Col Shrikant Purohit – was politically motivated and that there was no such thing as a Hindu terrorist group. This despite the investigations throwing up strong evidence that such a group (Abhinav Bharat) did exist and that Hindutva fanatics were not only responsible for the 2008 blasts in Malegaon that killed eight people and injured more than 80, but also for the Samjhauta Express bombing of 2007, in which 68 people, mostly Pakistanis, died, the 2006 blasts in Malegaon which killed 37 people, the 2008 Modasa (Gujarat) blasts that killed two persons and the Ajmer Sharif blast of 2007 in which three persons died. With people of the same ideological persuasion now in power, it is hardly surprising that an attempt is being made to scuttle the probe.
In the Modasa blast case, in which the perpetrators were linked to the Malegaon culprits, the NIA has last week given its final report to the court saying that the accused are untraceable, according to media reports. It is possible that in this case too some fixing has taken place.
Salian’s revelations may not be surprising given this context, but they are nevertheless revealing and their implications extremely dangerous for India’s social fabric. The hypocrisy of the BJP and the Modi government stands completely exposed. At a time when the prime minister is jet setting from one international capital to another and proclaiming India’s unequivocal opposition to all forms of terror, the reality is that his camp followers are assiduously working to protect terrorists because they happen to be of the ‘right’ religious persuasion.
Internationally, these revelations will weaken India’s argument that Pakistan is deliberately going slow in the trial of Zakiur Rehman Lakhvi, the prime accused in the terror attack in Mumbai on November 26, 2008. Pakistan will be only to eager to point out that the current dispensation in New Delhi makes it difficult for justice to be done in the Samjhauta Express case where so many of its citizens died.
But much more damaging than any loss of credibility internationally, is the extent to which the credibility of India’s criminal justice system, including the NIA, is being eroded among Indians. The effect on Muslims in particular will be terrible. They have seen how the handling of the Gujarat encounter cases has changed in the recent past, allowing most of the accused, including BJP president Amit Shah, off the hook. If this case too ends up with the accused being acquitted, the impact would be severe.
There are several elements trying to radicalise Muslim youth by suggesting to them that they cannot expect a fair deal in India, that the system is biased against them and in favour of the majority community. The manner in which the Sangh parivar is subverting or at the very least delaying justice in these cases plays right into the hands of these elements. As always, fundamentalists of all shades gain strength from each other’s activities, while the country and the working people in particular pay the price in terms of the deep divisions these groups create.
If this dire prognosis is to be prevented from coming true, action must be taken to show that talk of the law taking its course is not mere talk and that the commitment to fighting terrorism is not conditional on its religious hue. The officer or officers of NIA who asked Salian to go slow in this case must be identified and sacked. Also, it should be investigated and established as to who advised the NIA to go slow. Else, forget achchhe din, we are in for really bure din. 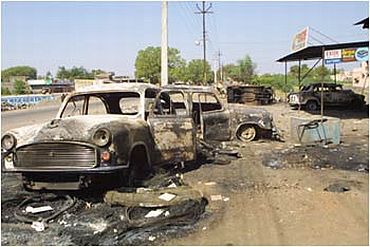