In the 2014 General Elections, a political shift took place in favour of the rabid right wing: the Bhartiya Janata Party (BJP). Other than several known factors, like the cascade of scams of UPA2, the organizational strength of the RSS and engineered communal polarization in the major states, there were a few other very significant cheerleaders who had gambled a lot for triggering this paradigm shift in favour of the saffron brigade. Narendra Modi’s brand of politics is, and has always been, a powerful blend of the communal agenda of RSS at the core and the aggressive practice of neo-liberalism in economic policy making. So as this deadly combination sustains in the choppy politics of the country, there is no wonder that the poster boy of the 2014 General Election is leaving no stone unturned to make his corporate cheerleaders happy. 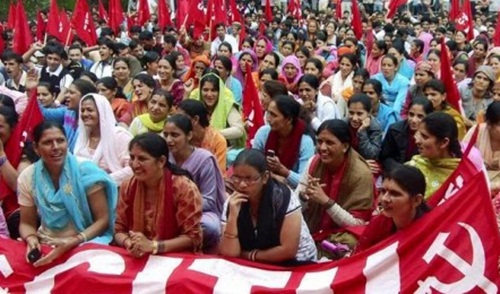 At the very start of their innings, the Central government diluted the budgetary allocation for the largest public employment programme of the world, MGNREGA. Soon they made their intention clear by diluting equity to the extent of 10% in Coal India (which is expected to yield Rs.23,600 crore), 5% in ONGC (Rs.19,000 crore) and 13.3% in NHPC (Rs.3,100 crore) and other PSUs such as SAIL, HAL, PFC. Allowing another additional Rs.15,000 crore divestment of government stake in non-government companies or those in which the government has a minority stake and the significant pro-corporate inclination of the Land Acquisition Bill emphasised the class characteristics of the government. The much debated reform in labour law is also part and parcel of the same dirty payback game of crony capitalism, in which Narendra Modi's supremacy is well known since the good old days of the over-hyped Gujarat Model.

Labour law reform has come onto the political agenda in India by the results of the 16th General Election where an aggressively pro corporate party got a single majority. Soon after coming to power, the union government has initiated a hectic and drastic move to amend several important labour laws in favour of the employers. While the Labour Department of the Government of India is busy figuring out the amendments to labour laws, the PMO has given prior consent to the states to go ahead with their amendments. Rajasthan, traditionally the political ‘laboratory’ of the Central Government for quite a few years now, was first to amend four key labour legislations – the Factories Act, 1948, the Apprentices Act, 1961, the Contract Labour (Regulation and Abolition) Act (CLRA), 1970, and the Industrial Disputes Act (IDA), 1947. Madhya Pradesh, along with few other BJP-led states, has also followed the same path. As it is commonly being argued that the reform is intended to address the problem of labour market rigidities and ensure a smooth economic investment growth by removing the unnecessary 'obstacles', the same old story of hiding the assault on the rights of the working people behind a populist slogan comes around again: 'Shrameva Jayate'. It is noteworthy that few other developing countries have been having similar debates about the form and extent of the regulation of labour law. But there is no such consensus or trend in favour of the weakening of worker protective labour law. On the contrary, there is a strong view point at different levels that market friendly labour flexibility is not a sufficient and perhaps not even a necessary condition for economic development. So the Centre’s efforts to push the labour reform only exposed their total servility to the interest of both domestic and foreign corporate.

The market friendly amendment of the IDA (Industrial  Disputes Act) is commonly being justified to nullify India’s inability to build a manufacturing base. But how protective really are the labour laws in our country, which are more violated than implemented? According to the new formulation in the IDA, the government’s prior permission for effecting retrenchments is necessary only in the case of permanent workers of an enterprise engaging up to 300 workers. Now if you calculate the tally, keeping these changes in mind, the contractual contingent which is out of the purview of the new IDA and therefore does enjoy the luxury of the government’s prior permission for retrenchments, stood up to 59.5%. So the argument that the organised manufacturing sector is crippled by worker friendly employment protection law is not at all valid. The government proposal to increase the percentage of workers needed for registration as a representative union from 15% to 30% is also a well planned effort for narrowing the path for collective bargaining.

In one of the other disastrous amendments to the CLRA, the union government proposed to raise the threshold of the applicability of the Act to more than 50 workers from the current 20. On one hand this amendment will throw almost all contractual workers out of the coverage of the protection law, and on the other hand, it will encourage the employer to convert the workforce into contract workers.

Similarly, the Factories Act that has been amended to curtail down its wider applicability (20 workers with power and 40 without power) and also increases the maximum overtime work to 100 hours, to ensure that the workers’ right to an eight-hour-day norm becomes a mirage. This retrograde amendment will snatch away the cushion of safety, health and welfare of the workers, which they used to enjoy since the last six decades.

The amendments proposed to the Apprentices Act, which directs the state government to absorb half of the apprentices cost for a company having less than 250 workers, opens the doors for the employers to replace regular workers with apprentices. The removal of the ban on night shifts for women may well bring a wide smile in the face of the corporate, but it raises considerable concerns, even among women workers.

Additionally, as the government tries to merge four existing laws – the Minimum Wages Act 1948, the Equal Remuneration Act, 1976, the Payment of Wages Act 1936 and the Payment of Bonus Act 1965, under a single broad Labour Code, the trade unions have rightly questioned the implications of such thrust.

The draft labour code not only restricts the power of Minimum Wages Act 1948, to fix the minimum wage, it also skips over the long awaited demand of National Floor Level Minimum Wage. The proposed single line replacement of nine-page Equal Remuneration Act 1976 is another area of great concern.  It immunizes the employer to discriminate workers on the basis of their gender in case of wage and recruitment. Not surprisingly, two proposed alterations to the Payment of Bonus Act 1965, one to do away with Section 23(2) which will disallow the worker to scrutinize the financial claims of the employer and the other one to expand the exemption under section 16 which allows the establishment to omit paying bonuses to the employees, neither meet the recommendations of the Indian Labour Conference nor the order of Supreme Court.

Labour law reform has been in debate since several decades but what is more surprising to see is that the tradition of consultation with registered central trade unions has been completely ignored. This autocratic attitude is more than enough to understand the Modi government's attitude towards the working people, to serve the interests of their masters; the corporate and the investors.

It was the Egypt of Pharaoh Ramses III where the first ever labour strike was recorded for food ration. It was the so called ‘developed’ United States of America of 1959 where half a million steelworkers went on strike demanding better pay. It was our very own India in 1974 where in the wake of Railway workers’ strike, the fate of the authoritarian government was sealed in the darkest hour of Emergency. From the backyards of Ludlow Jute Mill at Kolkata in 1928 to the strike by workers of 50-plus textile mills in Mumbai in 1982, from the year-long miners' strike in the land of Margaret Thatcher in 1984, to the Wall Street —a labour strike has always proved to be a mighty and lethal weapon for the workers to ensure their fundamental rights and earn public approval for their legitimate demands. When the state becomes oppressive, the strike becomes a necessity. The All India General Strike on 2nd September is therefore the need of the hour; it is the fight for fundamental rights.