Many well-wishers of the Left Democratic Front (LDF) government in Kerala are concerned about the ongoing controversy over the Silver Line project. The project is a semi high-speed greenfield North-South arterial railway styled as Silver Line to be implemented by a joint venture with Indian Railways - Kerala Rail Development Corporation Limited (K-Rail). The Opposition in Kerala - from Muslim communal outfits such as SDPI to Hindutva BJP, and of course, Congress-led United Democratic Front (UDF) have come out against the project.

A section of scholars in the state have also joined the critics. Some of them are worried that the Left government in Kerala is adopting neoliberal policies. For them certain type of technologies, size of projects or debt financing are all by themselves neoliberal and high-speed rail fits this framework. We, on the contrary, think that such a conclusion can be reached only by analysing the concrete context, the technology and the scale or financing that is deployed.
Kerala is celebrated for its successful redistributive strategy and far superior outcomes in the quality of life of its citizens as compared to the national average. Democratic decentralisation has been adopted to sustain the quality of public services and improve the productivity of livelihood sectors. But this is not a solution for the infrastructure deficit of the state created by public underinvestment in the past because of the state’s focus on social sectors.

Given the commitment to improve the welfare and social security of ordinary people, the budgetary resources would be inadequate for infrastructure investment. There are two choices: One, wait for fiscal consolidation through improvement in the state’s own revenues before addressing the infrastructure challenge. Two, initiate steps for fiscal consolidation but at the same time mobilise resources outside the budget through innovative methods and launch the infrastructure drive. The second option has been chosen. Such a strategy would provide a regional stimulus in the present recessionary conditions and the new infrastructure would enable the state to attract much needed investment into knowledge, skill and service-based sectors.
There are many naive questions being raised on whether the large outlay on the Silver Line project could be better used for more urgent social priorities. The answer is no, for the simple reason that it is a project tied to a loan approved by the government of India and, therefore, it cannot be used for any other purpose.

There is clearly a lack of appreciation among critics of the effort being made to overcome nfrastructure deficit in the state and transform Kerala`s economic base from the present low productivity regime to a knowledge and skill- intensive technology economy. Overcoming infrastructure backwardness is an important intermediate link in this transition.
In the above context, Kerala`s intervention cannot be compared with the high-speed trains contemplated in some other states where such projects are being pursued by neglecting the basic needs of the population and without adequate compensation and rehabilitation package. Thus, for example, the percentage of population below poverty line in Maharashtra is double that of Kerala. Going by the Multi -Dimensional Poverty Index, the poor in Maharashtra constitute 17 per cent of the population while the ratio in Kerala is 0.73 per cent. The compensation and rehabilitation package of Kerala is more comprehensive and liberal than of any other state.

Two Decades of Studies and Discussions

It is to be noted that the high-speed rail project in Kerala did not emerge out of the blue. The high-speed North-South transport corridor has been under consideration under successive governments in Kerala, both UDF and LDF, during the past two decades. Express highway, high-speed rail corridor, suburban train and elevated highway have all been discussed at different levels and reports prepared. Finally, a choice has been made for a semi high-speed rail greenfield track.
In 2004, the UDF favoured an express highway, it shifted to high-speed rail in the its 2011 election manifesto, once again shifted to eight-lane expressway in 2016 and six-lane expressway in 2021. In between, in 2012, based on the detailed project report or DPR prepared by Delhi Metro Trail Corpn or DMRC, the UDF proposed a high-speed rail. The LDF also concurred but soon their interest drifted to suburban railway. In short, UDF wanted a high-speed transport corridor but had no clear vision.

In sharp contrast, the LDF systematically followed up the idea of a high-speed transport corridor in almost every budget speech since 2009. The project was discussed in the International Congress on Kerala Studies in 2015 and was included in LDF’s election manifesto of 2016. It was felt that given Kerala’s terrain, a semi high-speed train would be more financially viable and a fresh DPR was prepared. Once again, the new proposal was in LDF’s election manifesto of 2021.
After receiving in-principle approval from the Railways, steps have been initiated for detailed social and environmental impact studies. At this juncture, both Bharatiya Janata Party and Congress, who in their 2014 Lok Sabha election manifesto promised a network of high-speed trains in India, have come out in opposition to the project. They have been running a virulent campaign, fanning fears and anxieties of people who are likely to be displaced. Their protests have taken to uprooting the markers for alignment demarcation at the ground level.

The question would still arise as to how a semi high-speed rail is a priority in the transport sector. Kerala is today nearly a mono road transport mode system, and it is an urgent requirement to have a fast mass transit alternative that can wean away long-distance car passengers from the road.

Modernisation of the existing broad-gauge rail with additional line and automatic signaling system cannot ensure greater speed, even for Vande Bharat trains, for the simple reason that nearly 40 per cent of the tracks are curved. This is more so in urban areas, making straightening of the track prohibitively expensive and socially unacceptable. Therefore, from the perspective of balanced transport structure, it is important to have at least a semi high-speed greenfield railway line.

Doubts have also been expressed regarding adequate ridership for high-speed rail because of the higher ticket charges. But such an apprehension is misplaced. The Silver Line ticket charge would be ₹ 2.29 per km against ₹ 18 for cars, ₹ 6.31 for flights and ₹3.84 first class AC rail coaches and ₹ 2.29 for second class AC coaches. 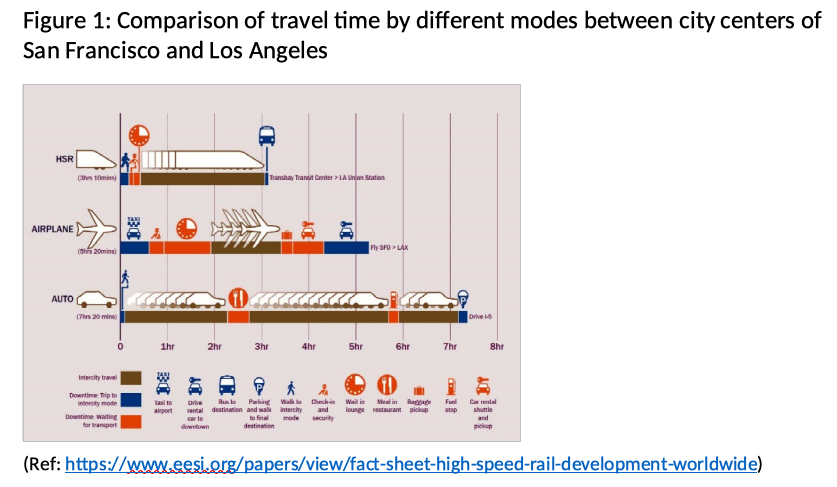 If the opportunity cost of additional travel time required because of ancillary activities is also considered, the choice would be for faster mode of travel even if it involves higher ticket charge. This would explain why many migrant workers from North-East to Kerala prefer to fly from Guwahati than take the slower train though the train ticket charge would be much lower. The economics of migrant workers flying is worked out in Figure 2. If the opportunity cost is calculated at ₹100 per hour, the flight charge would be ₹6,305, sleeper train ticket ₹6,730, and second AC ₹ 8,340. Be sure there would be sufficient riders for the high-speed train in Kerala. 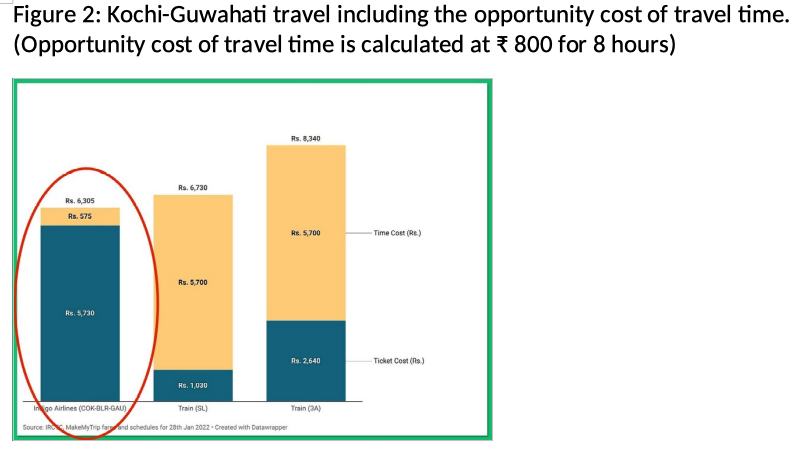 An important reason for advocating the Silver Line project is the environmental perspective. The carbon footprint of high-speed rail is much lower than that of air and road transport. Emission from different modes of transport per passenger, per km travelled is given in Figure 3. In the flights, besides CO2 emissions, the secondary effects from high altitude, non-CO2 emissions are also taken into consideration. In domestic flights, the total emissions are 254 grams per passenger, while that of high-speed Eurostar is only 6 grams. 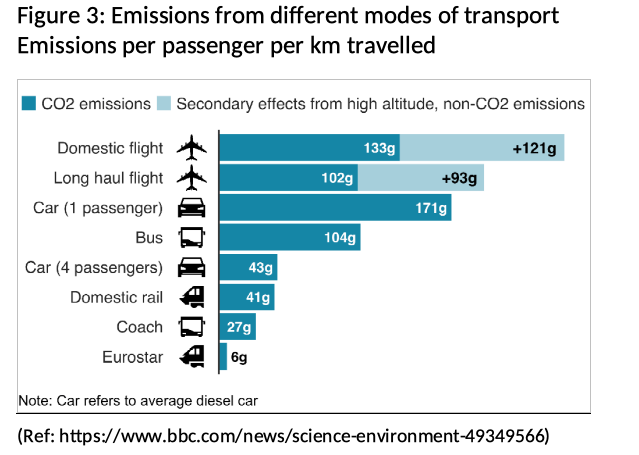 There has been criticism that the major source of emission in a high-speed train is during the construction of tracks and that the above comparison may not be relevant. Therefore, we have calculated the carbon equivalent emission of construction of the Silver Line, including construction of track and rolling stock. It comes to 8.21 while that of a four-lane road is only 0.7 gram. But the overall carbon emission, if manufacture of rolling stock and operations are also considered, we find that the four-lane road per passenger per kilometer emission increases to 151.6 gram while that of Silver Line is only 15.7 gram. The carbon impact of Silver Line is only one-tenth of roadways and would be around one-40th of airlines.

The new line runs parallel to the existing rail track for half the distance and does not cross any highly ecologically fragile area. If at all there is any such potential local damage, it will be revealed by the detailed environment appraisal, and mitigation measures will be taken. As for the stone, sand and soil required for the project, around 51,000 km of new railway tracks are being laid in India and the 53- km long Silver Line would constitute only a small share of the total national requirement.

Undoubtedly, there are around 9,000 families and establishments whose land would be acquired for the project. They would have genuine grievances which would have to be studied in detail and steps taken for alleviation, compensation, and rehabilitation. Kerala national highways are being 6/4 laned and the number of affected would be at least three times high than Silver Line. There is absolutely no protest anywhere because of the very attractive compensation and rehabilitation packages offered, fully in compliance with the 2013 Act. There have been similar experiences in several other major projects that are being currently implemented. The present protests are orchestrated by the project opponents and will be overcome by patiently explaining the policy and the package.

There has also been criticism regarding the technical and financial aspects of the DPR. Such criticism will be carefully considered, not only by Kerala government but also by the Indian Railways which is the sole authority to give the final approval of the project. It is not for the state government to choose the gauge or the signal system. All the high-speed rail projects under consideration of the Centre are on standard gauge, and Kerala alone cannot opt for broad gauge.
Some critics also point to time overruns in the implementation of large projects in the state and, therefore, feel it inadvisable for the state government to indulge in such huge projects. Well, there is a time for change for everything. And that is what is happening in Kerala.