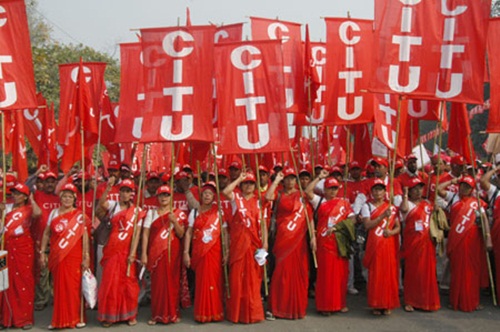 One of the defining features of India’s working class, and perhaps an in-built obstacle to its advance, is that women are either confined to the most ill-paid, insecure and vulnerable jobs, or they are simply kept out of the workforce. In the organized sector, women’s share in employment was just 18.6% in 2012-13, according to the latest Annual Survey of Industries (ASI) report. Female workforce declined by more than 1.9 crore between 2004-05 and 2011-12 according to successive NSSO surveys, and female work participation rates dropped to the lowest ever in the history of independent India in 2011-12. Of all the paid jobs added between 1993-94 and 2009-10, less than 10% went to womenwhile 90% to men. Two and a half decades of liberalization in India appears to have severely aggravated the marginalization of women in employment. This is a loss not only for women but for the whole people.

The women who do manage to find work in industry are faced with a slew of discriminatory practices, some so onerous that they may well get discouraged from taking jobs. The most blatant of these is the difference in wages between men and women. An ASI report from 2010-11 has these details: average daily earning of a woman worker was Rs.293 in the public sector compared to Rs.617 for men. In the private sector, women earned Rs.144 compared to Rs.265 for men. These are data for regular workers. Unfortunately, wages for contract workers are not broken up sex-wise, only the average daily earning is given as Rs.219 in public sector and Rs.198 in private sector. Women would be making up a substantial portion of contract workers, thus getting even lower wages. This discrimination is both kinds – lower wages for same work, and confining women to lower paid positions. But the result is that women are paid much less.

In addition, they have to face other very serious challenges. Take the example of maternity benefits. There is a specific law that guarantees 6 weeks paid leave and other benefits for maternity, applicable to factories with more than 30 women. The Employees State Insurance (ESI) also covers maternity. A Labour Bureau report gives these details of implementation of these laws in 2013. Of the 27 lakh women workers covered under ESI, just 31,512 got maternity benefits. That’s about 1.2% only. For non-ESI covered women workers, the situation was not too different. Some 80,000 factories and plantations were officially covered under the Maternity Benefits law but only about 20,000 had submitted returns (details) of how they were implementing labour laws. These had about 61,000 women workers of which 29,000 women took maternity benefits, that is, about 5%. The proportion got pushed up because among plantations, the rate was 14%. Plantation workers have generally strong unions. Another key provision that women need is creches so that their children are looked after when they work.This is mandated under the Factories Act. But crèche facility was provided by only 3,289 factories in the whole country in 2012.

A similar callous neglect can be seen for other needs of women workers including provision of creches, transport facilities, measures to prevent sexual harassment at the workplace. This was the traditional approach towards women workers and, today, despite a large number of educated and qualified women wanting to work, these practices continue unabated preventing them from working.

These conditions in the organized sector have led to an influx of women into the vast and unregulated unorganized sector with its very low wages, back-breaking drudgery and hostile working conditions. Women’s employment has seen increases in the unorganized manufacturing sector (home based work and small units), and other sectors like construction where women workers increased from 16 lakhs in 1993-94 to 79 lakhs in 2011-12 as per NSSO.

In several types of industries, like garments, electronic assembly, consumer products, even food items, it has become a lucrative option to outsource production to women in urban slums or villages at starvation level piece-rates. This saves the manufacturer a lot of ‘trouble’, taxes and payments to workers. All this work is outside the pale of labour laws, with no obligation to pay statutory wages or give social security benefits.

The other sector which has seen a big growth in women’s employment over the past two decades is what is called ‘Other Services’. This includes all kinds of personal, social, educational, health-care related services. And it is no surprise that women are preferred there because this is the traditional view of women’s role in society – as care givers, as cooks and maid servants, as child care giver and teacher.

There are about 50 lakh women currently working in various schemes and programs run by central and state governments. They include anganwadi workers and helpers, ASHA’s, mid day meal cooks, and women in several other smaller schemes. What is common to all is that these women workers are defined as ‘volunteers’ or ‘activists’ or ‘part-time workers’ even though they work full time in practice and perform important perennial tasks like delivery of primary health care in villages or taking care of children in anganwadis. Yet by defining them as volunteers they are denied benefits that would be given to regular employees. Their ‘honoraria’ are a pittance, they have no social security coverage and no work security, and their work load is very high. A large portion of these scheme workers have been organized in trade unions especially by CITU and have successfully fought for some concessions. But they remain irregular employees, at the mercy of governments.

All these streams of women workers, whether in plantations or bidi industry, scheme workers or factory workers, bear a dual yoke of exploitation, once like any worker and a second time as a woman worker. They will be joining the 2 September strike in a big way, not only to change their own conditions but to demand better opportunities for other women who are confined to the reserve army of unemployed.