Surgical Strike on Employment: The Record of the First Modi Government

The central government has finally allowed the release of the report of the 2017-18 Periodic Labour Force Survey. The previous government had blocked its release before elections because the survey showed a massive increase in the unemployment rate, worst in the last 45 years. Some data from the report that were leaked in the media showed that there had been a massive contraction in rural employment. In these Lok Sabha elections, BJP tried every trick, and with remarkable success, to distract the voters away from issues such as unemployment and livelihoods. The report perhaps saw light of the day formally possibly because, having won the elections with a massive mandate, the primary purpose of blocking the release of this report ceased to be relevant.

The report released on May 31st, after a delay of over four months, confirms what became available through media leaks and provides some additional details. The report also provides a considerable amount of data that has so far not been available. In this article, we summarise some new details that have become available with the release of this report.

The most important measure of overall conditions of employment is the Worker-Population Ratio (WPR), or what has traditionally been known as the Work Participation Rates. WPR is the proportion of population that is actually employed. It excludes persons who are unable to find employment, persons who have given up looking for employment because they realised no work was available for them, and persons who are not looking for employment because they are engaged in other activities (such as studies or housework). Of these, the last category is expected to be small, particularly among the rural poor, if one restricts the analysis to the working-age population (15 to 59 years). A fall in WPR for this age group is a clear indication of contraction in the availability of employment. It must be noted that a vast majority of workers in India are informally employed and do not have regular full-time employment. They include persons who were self-employed – working in their own farms, shopkeepers or street vendors – as well as persons who had casual wage-employment. WPR refers to all perons who are employed for at least 30 days in a year. Since workers who are employed for as little as 30 days are considered as employed, WPR does not capture the level of under-employment among workers. It is reasonable to expect that contraction of employment would result in a fall in WPR in the working age population as well as a decline in the duration of employment of workers. This latter aspect is not captured in the analysis of WPRs presented in this article.

Contrary to claims of the Modi Government, there was a distinct decline in self-employment across all categories except rural men for whom there was only a marginal rise. On the whole, proportion of population that was self-employed fell from 20.2 per cent in 2011-12 to 18.1 per cent in 2017-18.

The entire focus of the employment policy of the First Modi Government was on self-employment as it was argued that people should become job creators rather than job seekers. A special Ministry of Skill Development and Entrepreneurship was created and a host of schemes such as Start Up India, Make in India and Pradhan Mantri Kaushal Vikas Yojana were started. The misplaced premise of these policies was that unemployment was a result of lack of skills and capital, and imparting skills and cheap credit would enable people to start enterprises. The reality, however, was that the problem of demand created by an intense agrarian crisis and deflationary policies such as demonetisation made enterprises -- agriculture as well as non-farm enterprises -- nonviable. The disproportionate burden of this fell on small enterprises, which are the main source of self-employment, and the proportion of population working in own-account enterprises fell. The only marginal increase in self-employment seen in case of rural men was entirely on account of rural male workers moving back into agriculture as they lost employment in non-agricultural activities (Table 3). This marginal increase in self-employment of men in agriculture was a result of contraction of employment availability in non-agricultural activities rather than enabling of workers to start their own enterprises.

It has been argued by the government that these estimates from the Periodic Labour Force Survey are not comparable with the earlier Surveys of Employment and Unemployment because of a change in sampling strategy. Amitabh Kant, CEO of Niti Aayog and  member of the National Statistical Commission, has argued that the sample of the PFLS survey is only 0.03 per cent of Indian households and therefore not reliable. A similar argument was made by Surjit Bhalla, former member of the PM’s Economic Advisory Council, and Avik Sarkar, head of the Data Analytics Cell in the NITI Aayog.

This is a bogus argument. Even an elementary textbook of statistics tells us that the reliability of estimates from a survey depend on the absolute size of the sample and not on the sampling ratio. We find it difficult to believe that those at the top of the national statistical and policy establishment today seem to have forgotten these elementary lessons. The PLFS survey, as the earlier Surveys of Employment and Unemployment, are based on a large, scientifically-designed, stratified random sample. Such a sample represents its sampling frame, nothing less, nothing more. There is no change in the way sampling frame is drawn between the two rounds of surveys. The sampling strategy has changed. But estimates from both the surveys use unbiased estimators that account for multipliers based on their respective sampling strategy. A change in sampling strategy may, if at all, limit the extent and kind of disaggregation that one is able to do. It has no bearing, either in terms of having an inherent bias or a problem of precision, for all-India and State-level estimates.

The PLFS survey has established beyond any reasonable doubt that the period of First Modi Government was a period of a very serious contraction in availability of employment. The problem of unemployment was most serious in rural areas, affected the entire country and most of the major sectors of the economy. The government has refused to accept it so far. It ruling party also managed to deflect attention from issues such as employment during elections by successfully using its propaganda machinery. But there is no doubt that the disastrous performance of the First Modi Government on the employment front would continue to haunt the Second Modi government. 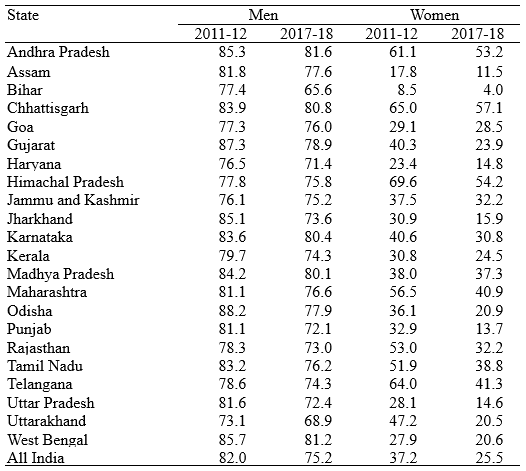 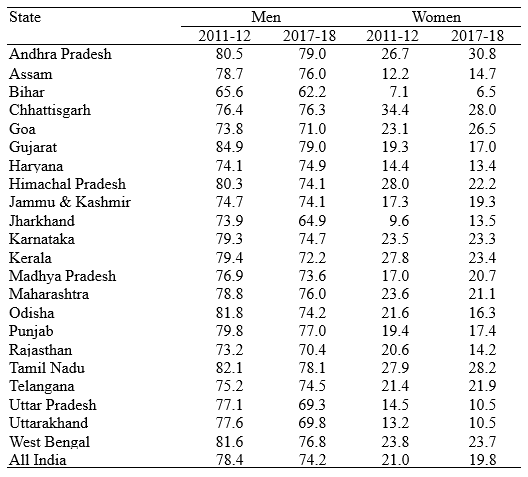 Table 3. Proportion of population employed in different sectors of the economy, men and women, rural and urban.

Table 4. Proportion of population engaged in different types of employment, men women and all persons, rural and urban, India (per cent). 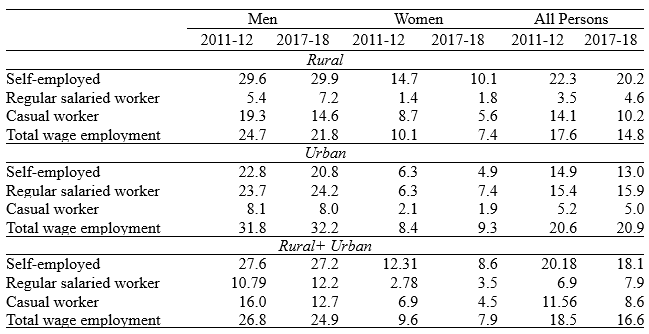