Modi had once described them as the “wealth creators” of India, and so naturally, he was consulting them on how to push India towards the grand target of making India a $5 trillion economy by 2024. Recall that in the preceding months, the government had announced huge tax concessions to corporates, slashed its expenditure on key welfare schemes to keep the Budget deficit in check (which makes foreign investors happy), opened up sectors like coal mining to foreign companies and put several public sector units on sale. All this was supposed to boost the economy which was in a tailspin.

What is the result of all this huffing and puffing, and help to corporate tsars? Zero, as far as one can make out from the numbers. And, worse, if one ventures out and talks to people in distress.

An already out of control tide of joblessness has now become coupled with unbridled price rise, especially of food prices. The people of the country are thus caught between these two relentless grinding stones. Unsurprisingly, the Modi government has so far been unable to check either of them.

In fact, all other indicators of the economy’s health are in the red: exports have fallen for the sixth month in row and imports for the tenth month; bank credit growth decelerated from 14.8% at end January 2019 to 7.1% in January 2020; and the Index of Industrial Production (IIP) remained more or less stagnant.

Latest data from Centre for Monitoring Indian Economy (CMIE) says that overall unemployment rate was 7.6% on February 18, according to weekly estimates. It has been running above 7% for about a year now, sometimes crossing over 8%, as it is likely to do yet again, this February.

If you break up the average unemployment rate into its urban and rural components, the picture is even more dire. Urban joblessness was at a staggering 9.3% this February, while rural joblessness had stood at 6.6%. See chart below. 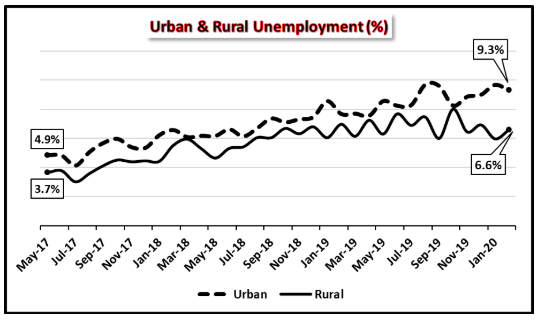 From 4.9% in May 2017, urban joblessness has steadily increased to the over 9% range. This is causing immense discontent among urban youth, reflected in, for instance, the bulk of youth voting against BJP in the recent Delhi Assembly elections, according to one survey.

In rural areas, too, joblessness has increased similarly from 3.7% in May 2017 to the present level. In case you think that the rural jobs situation is better – think again. The lower joblessness figures for rural areas is not because there are more productive jobs available there. It is because agriculture has the ability to absorb more people without any increase in production. If a family is working in the fields, one more member joining them doesn’t add to their output. They continue to share the same income, but with smaller shares.

A researcher will find the additional one person “employed” but, actually he/she represents disguised unemployment. It’s a marker of distress not better employment. The same person would have been declared “unemployed” in a city because you can’t get absorbed like that easily in urban occupations, unless it is some self-employed, informal occupation. And, the unconscionable levels of joblessness in urban India are a living testimony for utter failure of Modi’s economic policies. It also blows up the myth that urban areas are drivers of the economy and employment.

The downward momentum of unemployment that is pushing more and more families into poverty has now acquired another force: inflation or price rise. In the past one year, family budgets have been devastated by galloping prices, especially of food items. 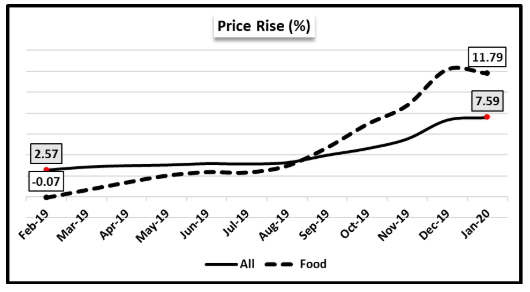 In one year, general inflation (all commodities and services) has risen from 2.57% to a painful 7.59%. That’s a six year high. And, prices of essential food items has sky rocketed from a mere 0.07% to a deadly 11.79%. All these numbers, available on the Ministry of Statistics site, represent percentage increase over one year.

Meanwhile, as an earlier piece had pointed out, wages and salaries are either stagnating or even falling, after adjusting for inflation. The effect of higher prices without any increase in wages or salaries means increasing poverty. Families have to cut their spending on food items, and various other things to survive. It is a devastating blow to the people.

Freedom for Rich, Strife and Violence for the Poor

The Modi government is not really concerned with the people’s condition, and their distress. It continues to dogmatically stick to policies of restricting government expenditure, giving huge concessions to corporates (both domestic and foreign), do away with protective labour and other welfare laws, and hollow out the public sector. These are policies meant to fill the coffers of the rich, under the fig leaf of the discredited theory that something will trickle down to the people.

As far as the people are concerned, the only thing Modi and BJP can think of is RSS prescriptions. In a macabre coincidence (or was it a thought out move?) ever since the economy started sinking last year, the Modi government has unleashed a barrage of moves aimed to sow divisions in people. These include abrogation of Article 370 and later, the changes in citizenship laws to discriminate against Muslims, and proposing the hated National Register of Citizens (NRC). That these RSS prescriptions also fulfil the sorely needed diversion from economic devastation is again, not a coincidence.

In short, the Modi government’s solution of choice for the economic crisis is this: freedom for the rich to exploit and make profits, while the suffering people can fight amongst themselves. But, as the recent Delhi elections (and earlier Jharkhand, Maharashtra and Haryana) state Assembly elections, and also the January 8 all India strike showed, the people may be wiser than what Modi and Shah—and Nagpur—think.